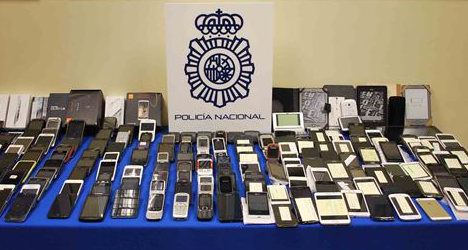 Some of the 109 recovered phones on display in a police station on Madrid's Puerta del Sol square. Photo: Spanish National Police

Police are looking for the owners of 109 mobile telephones recovered in the Madrid underground, the force said in a statement with a photo of the phones and several e-book readers.

"They are devices found or confiscated from people who could not prove they were the owners."

The loot will be on display for several weeks in a police station on the Puerta del Sol square in the central tourist district of Madrid from 8am until 10pm, it said.

Police said they recovered 258 phones and six tablet devices overall in a recent operation. Most of the items have been returned to their owners.

For the rest, those whose phones have been stolen or lost can go to the station with evidence of ownership, such as a police theft report or the original box for the device.