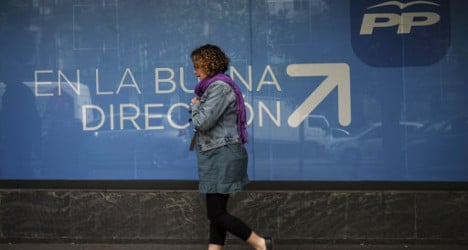 Representatives from six political groupings participated in the live debate, described by El País newspaper as a "loose" affair and much more Europe-focused than the first such event several days ago.

That debate featured only Spain's two major parties — the ruling conservative Popular Party (PP) and the socialist opposition PSOE party — and centred on their respective financial records during the crisis.

It was also marred by a subsequent sexist gaffe by PP candidate Migual Arias Cañete, who said he had gone easy on his opponent Elena Valenciano because he hadn't wanted to appear sexist.

On Monday, however, candidates from those two parties were joined by others from the left-wing Izquierda Unida (IU), and the centrist Union of Progress and Democracy (UPyD).

Critically, they were joined by Ramon Tremosa for the Coalition for Europe grouping, which represents a spectrum of Spain's Basque, Catalan and Galician nationalist parties, and Josep Maria Terricabras from the Left for the Right to Decide group, representing Catalan nationalist interests.

It was the issue of Catalan independence which took up much of the air time during the debate, to the point where the UPyD candidate Federico Sosa Wagner tried to draw a line in the sand.

"OK, that's enough, let's talk about other issues here, we are talking about Europe, we should be concerned about the US spying on European authorities," Wagner said.

European Commission President) Barroso "is the guardian of the treaties" and "has said the exit of Catalonia (from Spain)" would see it leaving the European Union. "It's all been said," said an exasperated Wagner.

"Nationalism is the worst disease that Europe could contract," Wagner said later.

During the debate, Pons also took the chance to stress Spain's "improving economy" and the fact that "7,000 jobs are being created every day", while taking aim at the socialist's own economic record.

His socialist PSOE counterpart, Ramón Jáuregui. objected to this, describing the PP's crowing about the economy as "past it's use-by date".

Both the UPyD's Wagner and Izquierda Unida representative Willy Meyer, meanwhile, attacked the bipartisanship of the two major parties and their attempt to dominate the electoral landscape in the lead-up to Sunday's vote.

The debate was watched by only 838,000 people, Spain's Huffington Post reported on Tuesday. That was a TV audience share of just 4.2 percent.