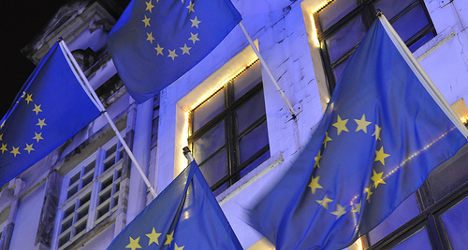 The results of the poll in Spain's left-leaning El País newspaper suggest a participation rate of 43 percent, lower even than the previous lowest turnout of Spaniards in European elections of 45.9 percent in 2004.

The absention rate in Catalonia could be even higher with only around 40 to 43 percent of people expected to cast their ballots, the survey showed.

This result is in stark contrast to the results of a recent survey by research institute CIS, which found over 64 percent of those polled said they would "certainly" or "probably" vote.

Some 32.6 percent of people said they would vote for the PP while 32.2 percent were planning to cast their ballot for the socialists.

The El Mundo poll gives 10.3 percent to the left-wing group Izquierda Unida, or around six seats.

The paper also highlighted  the fact that smaller parties have stolen votes from Spain's major parties,

The centrist UPyD party could win 6.2 percent of the vote at Sunday's election, well up on the 2.8 percent garnered in 2009, according to El Mundo.

A separate poll run by the right-leaning El Mundo newpaper found, however, that the PP were far ahead of the PSOE, with the ruling party predicted to win 33.8 percent of the vote against 25.7 percent for the socialists.

By those calculations, the PP would pick up 21 or 22 seats, while the opposition would only claim 15 or 16 seats.

Spanish turnout in European elections hit a high in 1987 when nearly 69 percent of voters exercised their democratic right at the polls. By the 2000s, however, this rate had dropped to just 46 percent.