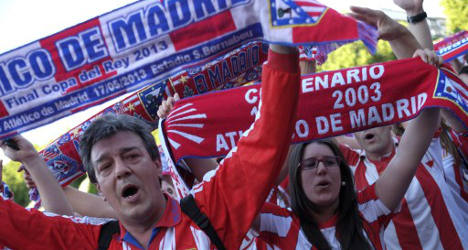 Diego Simeone's Atlético, this season's surprise packet in Spain, have finished at the top of the table after the 1-1 draw.away from home

It was a fitting end to one of the closest finals to a Spanish league in many years, and one that was decided on the final day.

Atletico Madrid claimed their 10th Spanish league crown with the victory and their first in 18 years after coming from behind to draw 1-1 away at title rivals Barcelona.

Alexis Sanchez's stunning strike fired Barca into the lead on 33 minutes, but Diego Godin's header four minutes into the second-half was enough to give Atletico the point they needed to become the first side other than Barca and Real Madrid to win La Liga in 10 years.

A point for both sides means that Barca finish the season ahead of third-placed Real Madrid thanks to a better head-to-head record, three points adrift of Atletico.

"We have fought all year and the work we have done is amazing. To last 38 games against two great teams Real Madrid and Barcelona is incredibly difficult," Godin told Canal Plus.

"The boss told us at half-time that we were going to score a goal. In the end football has been fair to us."

Barca, meanwhile, finish a disappointing season without a major trophy for the first time in six years.

"Congratulations to Atletico. They are deserving champions," said Barca captain for the day Andres Iniesta.

"We had our chances until the final game but they have been better and there is nothing more to say. We are hurt to lose the league in the final game.

"We depended on ourselves to win and we haven't done, so there is great disappointment because if we had managed to do it the feeling would be very different."

The visitors had started brightly but were dealt a huge blow after just 15 minutes when top scorer Diego Costa pulled up with the recurrence of a hamstring injury that will also make him a huge doubt for the Champions League final against Real Madrid next weekend.

Arda Turan was then also forced off with a hip injury as Adrian Lopez and Raul Garcia entered the fray.

Barca grew into the game as the half developed and could have been ahead when Pedro Rodriguez wastefully headed over Dani Alves' precise cross from the right.

When the Catalans did go in front just after the half hour it was in spectacular fashion as Lionel Messi cushioned the ball into Sanchez's path on the right side of the area, but despite the narrow angle he managed to thrash the ball high past Thibaut Courtois at the Belgian's near post.

Atletico forced a series of corners without carving out a clear-cut chance in their search for an equaliser before the break, but the half-time whistle also brought frustration on the part of the Barca players as both Messi and Sergio Busquets were booked for dissent.

David Villa came within inches of an equaliser a minute after the restart when his low effort came back off the post and the former Barca striker had another opening moments later that was smothered by Jose Manuel Pinto in the Barca goal.

However, Diego Simeone's men only had to wait a minute longer to be level as Godin rose highest in the box to power home Gabi's corner.

Barca then suffered an injury blow of their own as Busquets had to be replaced by Alex Song, whilst Neymar was also introduced by Gerardo Martino in the search for a winner.

Messi did have the ball in the net with 25 minutes remaining, but he was flagged offside as he latched onto a loose ball inside the area.

Alves stung the palms of Courtois with an effort from 25 yards as Barca camped themselves in the Atletico half for the final 10 minutes.

However, despite piling bodies forward, Barca failed to carve out another clear opening in the final stages as Atletico saw the game out to stretch their unbeaten run against Barca to six games this season.