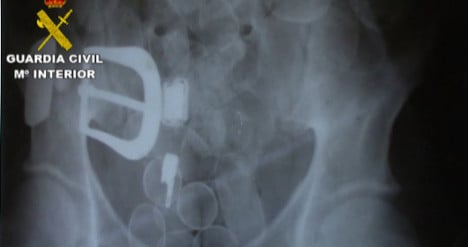 By the time he had landed in Spain, the cash-strapped lawyer was suffering terrible stomach pains brought on by the bags of cocaine obstructing his intestines. Photo: Guardia Civil

Four years on, Spain’s Civil Guard have been able to determine what killed the man and who was responsible for his death.

According to their report, J.A.U.I., a Colombian national with Spanish citizenship, was hired by a drug lord from his country of birth to transport cocaine in his stomach from South America to Spain.

The cash-strapped lawyer endured a long journey from Colombia to Chile, where airport security are reputed to be less wary of drug-traffickers and smugglers.

By the time he had landed in Spain, J.A.U.I. was suffering terrible stomach pains brought on by the bags of cocaine obstructing his intestines.

But his employer, Colombian drug trafficker J.AV.H. as named by Spanish police, was more interested in getting his hands on the product than allowing his mule to survive.

An autopsy revealed the man had been given painkillers to appease the excruciating pain.

Forensic examiners ruled he had died from intestinal obstruction but noted the object had been cut out and the stomach stitched up with fishing line.

His body was dumped in a forest near Malaga in August 2010  .

The drug king pin operated from Córdoba and Seville when in Spain, using several identities, addresses and security personnel to avoid capture.