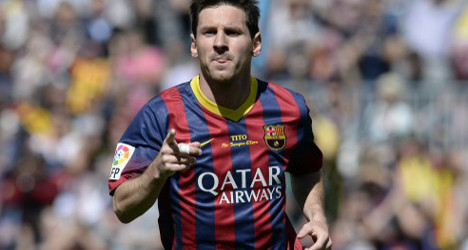 FC Barcelona sponsors Qatar Airways will be delighted that Messi has agreed to keep wearing their shirt. Photo: Lluis Gene/AFP

"FC Barcelona has reached an agreement to adjust the terms in the contract binding Leo Messi to the club as a professional first team player. The revised and updated contract will be signed over the next few days," the club said in a statement on their website.

The deal is expected to see Messi overtake Real Madrid rival Cristiano Ronaldo as the biggest earner in world football.

"There is the will within the club that he becomes the best paid player in the world," Barça president Josep Maria Bartomeu said in an exclusive interview with news agency AFP back in March.

"He is the number one and, as we have said various times, he also deserves to be the best paid player in the world."

Messi has become a legend at Barcelona since making his debut in 2004 scoring 354 goals in 424 games making him the club's all-time leading goalscorer.

"The deal should allow him to relax and fundamentally for the club it is important to tie down the best player in the world," Barcelona coach Gerardo Martino said on Friday.

"For Barcelona and for Leo it is very good news."

Should Barça beat Atletico Madrid on Saturday the Argentine will win his seventh La Liga title and his 22nd trophy overall with the Catalans, including three Champions League titles.

However, despite scoring over 40 goals for a fifth consecutive campaign, Messi has had his most difficult year both on and off the field in his career.

The 26-year-old appeared in court in September over tax fraud allegations relating to his image rights, whilst the arrival of Brazilian star Neymar at Barcelona this season has challenged his position as top dog at the club.

Messi was also struck down by persistent hamstring injuries during the first-half of the season and returned to Argentina for a month in December to rest and recuperate away from the spotlight in the Catalan capital.

He hit the ground running on his return including a run of 17 goals in 12 games as Barça ousted Manchester City from the Champions League and brought themselves back into the La Liga title race with a 4-3 win at Real Madrid thanks to a Messi hat-trick.

However, his threat was blunted by Atletico as Barcelona bowed out before the semi-finals of the Champions League for the first time in seven years and in Barça's defeat to Real Madrid in the Copa del Rey final last month.

Once Saturday's title-decider with Atletico is out of the way, Messi's focus will turn to his quest to win the first major trophy of his career at international level as he captains Argentina at the World Cup in Brazil next month.