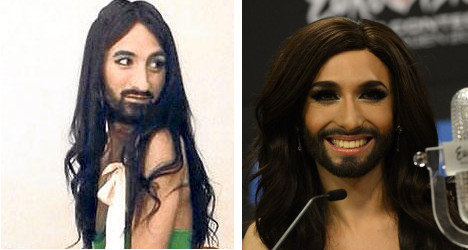 Which of these two is the real Conchita Wurst? Photo: Facebook/Jonathon Nackstrand/AFP

"It's horrible, since last Saturday lots of people on the street, on Facebook or via WhatsApp have been telling me I look like Conchita Wurst.

"In reality I don't think we are that similar."

These are the pained words of Mateu Jaume Roig from Vilafranca de Bonany in Majorca.

Roig was out on the town when the Austrian singer Wurst — real name Thomas Neuwirth — was on stage dazzling Europe with his power ballad Rise Like a Phoenix.

"My phone was ringing and people were asking me if I had been singing at Eurovision," Roig explained to Catalan daily La Vanguardia.

"People were even coming up to me and taking photos of me".

Roig actually cut his hair a few weeks ago but has since been wearing Conchita-style extensions. The 31-year-old also has a penchant for sleek gowns and actually promotes musicals in his free time.

There is even talk of a move into local politicas.

His Austrian lookalike, meanwhile, has another Spanish connection: In 2012, Wurst appeared on the Spanish travel show Callejeros Viajeros in a segment about the city of Vienna.

"Everybody looks at me, and everybody loves the look," she told the presenters, before explaining she'd recently come second in the country's auditions for Eurovision.