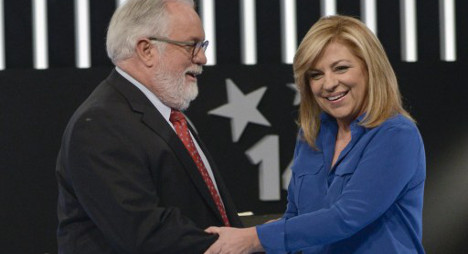 Miguel Arias Cañete, candidate for Spain’s ruling Popular Party in the upcoming elections, caused more of a stir after rather than during the debate by alleging he had gone soft on his socialist rival, PSOE candidate Elena Valenciano, because “it’s complicated to show intellectual superiority” and not come across as a “chauvinist” “for cornering a defenceless woman”.

Regardless of his reasoning, the political debate aired on Spain’s national broadcaster RTVE1 was focused primarily on the alarming unemployment figures ‘inherited’ by Spain’s ruling PP from their socialist predecessors and, in retaliation, the crippling spending cuts introduced since the arrival of the right-wing to power.

Corruption, Catalonia and Europe (despite it being the primary purpose of the talk) were surprisingly all absent from the debate.

Instead the two candidates seemed more interested in rebuking their parties' previous or current shortcomings.

“We were Europe’s miracle, the Germany of the south,” argued Cañete.

The white-bearded former minister of Agriculture, described in Spain’s edition of The Huffington Post as "red in face, holding on tightly to his notes and with some minor lapses in concentrations", made a bigger impression on Twitter for the white dribble he built up on his lips during the debate.

He was 'saved by the bell' when RTVE cut to adverts as Valenciano began to grill him on Spain’s controversial new abortion laws, which she argued the PP had shelved for the time being through fear it would affect their European election results.

"I am a mother, I have a son and a daughter, it's the best thing I've done in my life. But I decided freely. You (and your party) are trying to impose your morality. You have hidden the law, you know the people don't want it," she said.

The planned reform has outraged pro-choice groups and brought thousands of people out onto the streets to protest.