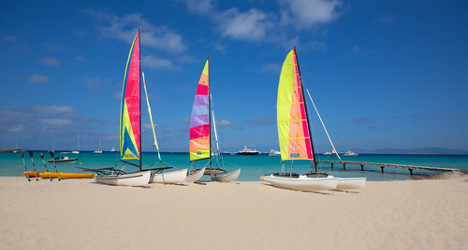 Photos of yacht on a beach: Shutterstock

The Blue Flag rating is awarded by the non-profit Foundation for Environmental Education (FEE) to beaches and marinas that meet tough water quality and safety standards.

Some 48 countries participate in the voluntary scheme which also takes environmental management and education into account.

Spain has the highest number of Blue Flags in the world since 1987 and 2014 is no exception.

SEE ALSO: The Local List of Spain's beaches for 2014

On Tuesday FEE annouced the country now has 573 beaches and 108 marinas with the Blue Flag denomination. This puts Spain streaks ahead of Greece (407), Turkey (397) and France (379).

Galicia has the highest number of blue flag locations (123), while Valencia comes close with 120.

State Tourism Secretary Isabel Borrego welcome the news of Spain's Blue Flag results for 2014. Speaking on Wednesday, she highlighted Spain's 8,000 kilometres (5,000 miles) of coast and said the country's 300 days of sunshine were an "added incentive".