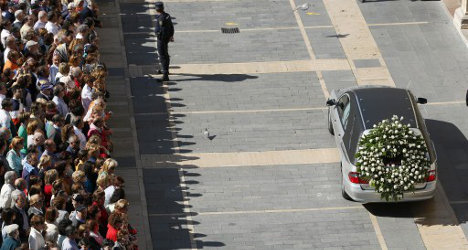 A hearse carrying the coffin of Leon provincial council chief Isabel Carrasco arrives at the Cathedral in Leon on May 13, 2014. Photo: Cesar Manso/AFP

Last March, the death of Adolfo Suárez – Spain’s first democratic Prime Minister and the man who helped unify the country after 50 years of dictatorship – inspired an unusual wave of mourning amongst many politically disillusioned Spaniards.

Less than two months on, the cold-blooded murder of provincial council leader Isabel Carrasco – gunned down in broad daylight by a mother and daughter with no previous criminal convictions – met with a far more mixed reaction.

News of the death of this politician with Spain's ruling conservative Popular Party made headlines around the world within minutes, but a number of Spanish dailies took the liberty of speculating or assuming her killing had been politically motivated before this was proven.

Conservative national newspapers ABC and El Mundo linked the crime to the current climate of "antagonism" between Spain’s political classes and the general public and pointed out that "insults, booing, harassment and physical abuse" have become "the order of the day".

Even news sources that didn’t jump to such conclusions made mention of Carrasco’s temperament, her political influence and her run-ins with the law, as if to imply these had played a role in her killing. Perhaps influenced by the media debate, The Local Spain did so as well.

Digging up the dirt on someone the day they’ve been brutally murdered can seem tactless and cheap.

Worse, there is also a danger that you end up appearing to justify Carrasco's murder or to suggest that it was somehow deserved. Nothing could be further from the truth.

But this is Spain and scrutinizing politicians has become something of a national sport, many would argue with good reason.

After six years of economic crisis, chronic employment — currently at 26 percent — and a seemingly endless round of corruption scandals, many Spaniards have very little faith left in the country’s major parties.

In the latest monthly poll carried out by Spanish social research institute CIS, the average rating for people’s trust in those parties was less than two out of a maximum 10 points.

For the government, this was only slightly higher at 2.45 percent.

And Carrasco herself was as controversial as she was powerful within Spain’s political sphere.

None of this sat well with constituents who watched her wealth increase during the country’s economic crisis.

According to Catalan newspaper La Vanguardia, she was in 2011 found guilty of the rigging of several public entrance examinations for the council she presided over, a ruling she appealed.

But there was no stopping Carrasco, who "despite her small size, her very strong character and the way she took the reins of power caused her to be known as the 'super-delegate'," as local newspaper Diario de León carefully put it.

She also allegedly threatened to withdraw government subsidies from those who opposed her and scared off prying journalists with defamation charges.

Should it therefore be that shocking that her legacy has received mixed reactions within Spain?

Twitter has turned into a hotbed of debate for those who consider the truth about Carrasco should be told, regardless of her demise.

This rhetoric has become even harder to ignore since Spain’s Interior Ministry on Tuesday ordered National Police to scour social media sites for negative comment about Carrasco, a move which has already led to two arrests.

"Hello, Mr Policeman. I’m having a beer while you have to read through these stupidities," wrote  a Twitter user in response to the government’s decision to monitor any derogatory comment about the late politician.

To many Spaniards, both incidents are further proof of the ruling Popular Party’s attempts to prevent any public criticism of the government and promote fabricated anti-radicalism campaigns that justify their stringent security laws.

The eagerness of right-wing commentators to label Carrasco’s murder as an escalation of the so-called escraches (demonstrations directly targeting politicians in their homes and offices) has not helped calm the waters.

"Nobody should be fooled, these brainless hating brats are a product of Cayo Lara (left-wing Izquierda Unida leader) and Gran Wyoming (TV presenter who hosts El Intermedio, programme that often criticizes politicians),” ABC reporter Hermann Tertsch wrote soon after he found out about Carrasco’s death.

"Isabel's Carrasco's death IS NOT a personal revenge, it's linked to her position. Those who defend escraches should take note" Telemadrid journalist Isabel San Sebastián.

It now appears the murderers’ motives were personal rather than political, the mother having confessed on Wednesday that a "long-standing hatred" of Carrasco as the reason behind her crime.

Both women were also Popular Party affiliates, another factor which appears to disprove this was a politcally motivated crime.

But even after this information was made public, Spain’s ruling PP and its sympathizers appear to want to blame Carrasco’s murder on the "breeding ground of resentment towards politicians" allegedly masterminded by ‘radicals’ such as anti-eviction fighter Ada Colau and TV presenter El Gran Wyoming, as El Mundo columnist Salvador Sostres put it.

Rather than a plea for peace, all that does for a large sections of the population is further ratify the deep divide between them and those in power.

Carrasco was by all accounts no angel. By no means does that justify her life being taken in such an appalling fashion or in any other. Her murderers aren’t considered heroes or martyrs. Their actions are being condemned even by those who loathed Carrasco and everything she represented.

But expecting all Spaniards to mourn her would be a tall order.

As Twitter user Alfons Beda put it: "Spain is a country where stealing, lying and swindling is ok, but not mourning the death of Isabel Carrasco is frowned upon."

For many, her political life represented everything that’s wrong with Spanish politics, a crippling problem that remains to be tackled.

Her murder has once again revealed the deep faultlines in Spanish society — between the right and the left, and between the country's embattled political class and Span's increasingly disenchanted citizens.