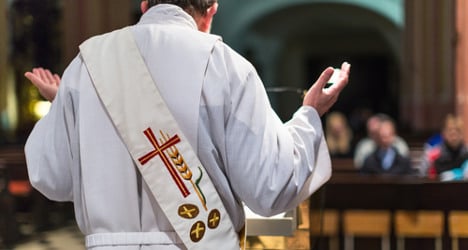 Photo of a priest in a church: Shutterstock

Negative comments on adultery, sermons on the tyranny of evil thoughts, and accusations that society is living in "cloud cuckoo land": these are just some of the complaints leveled at Jesús Conde, priest of Punxín and Freás, by his parishioners.

Conde's congregation also allege he had refused to give communion to unmarried couples who live together since taking office in March.

Simmering tensions came to a head last Sunday when aggravated parishioners refused to let Conde hold mass, alleging he had refused to listen to their complaints.

They then took their grievances to Conde's superior, the bishop of Ourense, and the embattled priest resigned on Monday.

"If my work in one place isn't going to make sense, for whatever reason I will resign," Conde was quoted as saying by a media spokesperson for the bishop.

"Knowing [Conde], he will be aware, without a doubt, that he has put his foot in it, and will ask for forgiveness. If he is aware he has made a mistake, he will definitely admit that," the spokesperson explained.

Perhaps the situation had got to the point it had "because the church is doing many things — many good thing, but also bad things," the spokesperson said.

That spokesperson was also keen to stress that Conde hadn't been "pressured" into leaving the job.

But church sacristan Jonathan Veiga, who quit over tensions with Conde, had a different view on the matter.

"I think they pressured him" into resigning. There was a "voluntary aspect but there was also pressure on the part of the bishop," he said, adding the situation was a first for him.

This is not the first time a Spanish priest has landed himself in hot water in recent times.

In early May, a sermon by a Spanish priest caused a storm after he spoke of how men wouldn't beat their wives to death 30 years ago because they had Christian values.

"Thirty years ago there was a lot more ignorance and a man would maybe get drunk and when he got home beat up his wife, but he wouldn’t kill her like they do nowadays," the priest in the southern city of Jaén told his congregation.