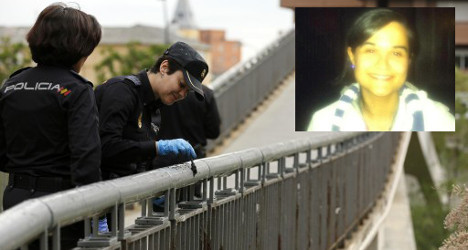 Montserrat Triana (inset) and her mother are being held over Monday's murder of Spanish politican Isabel Carrasco. Photo: Cesar Manso/AFP/Facebook

The policewoman, an agent with León's municipal force, handed in the weapon inside the bag on Tuesday night, according to Spanish national daily El Mundo.

Police said the revolver was a Taurus with its serial number scratched off, and only three of six bullets loaded.

The agent told police she wasn't aware of the contents of the bag, adding she had been given it by the daughter Montserrat Triana just after the killing in broad daylight.

But police have detained the 41-year-old and are now investigating whether she was the woman implicated in the crime, as she did not hand in the murder weapon until 24 hours after the killing took place.

Carrasco, 59, who led the ruling Popular Party in Spain's León province, was shot repeatedly on Monday as she crossed a footbridge in the university city on her way home, police and witnesses said.

Police arrested two suspects shortly after Monday's late-afternoon shooting: a 35-year-old woman who lost her temporary job at the León council three years ago, and her 55-year-old mother.

On Tuesday, the two women denied being guilty of the crime, appearing calm during a judge's hearing, according to El Díario de León.

Although no motive for the crime has been officially established, the most popular theory being put forward in the Spanish press is one of personal revenge.

The daughter's temporary job with the council had expired when someone else was chosen for the position in 2011, a León city hall source told news agency AFP.

But in addition to laying her off, the council then said it had mistakenly overpaid her €12,000 ($16,500) and wanted its money back. This figure was given as €6,500 by El País newspaper, citing other internal sources.

Spain's interior ministry have also come out in support of the theory that the crime was one of personal revenge.