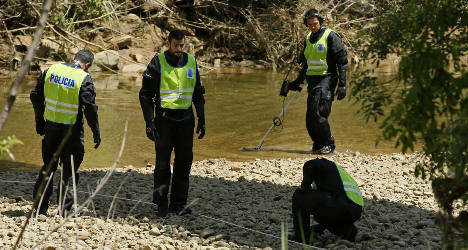 Police officers search for a gun and bullet cartridges in a river under the bridge where Leon provincial council chief Isabel Carrasco was killed in León on Monday. Photo: Cesar Manso/Manso

María Montserrat G. F told police investigators she killed Carrasco because of the way her 35-year-old daughter had been treated.

Her daughter, also being held in custody over the murder, was fired in 2011 from the provincial government headed up by ruling Popular Party politician Carrasco, and had been locked in a wage dispute with the regional authority since that time.

The confession comes despite earlier declarations by the pair that they had played no part in the crime.

Police believe the murder was planned and that the mother and daughter pair had lain in wait near the politician's house on several occasions, according to El País newspaper.

The crime was committed on Monday because Carrasco had been walking alone, but could have taken place on another day, police said.

The role of the daughter in the crime is yet to be determined, as is that played by her friend and police officer who handed in the murder weapon some 24 hours after the crime.

Monday's killing has shocked Spain, with Prime Minister Marian Rajoy decrying it as a "wretched crime".

Mourning relatives wept outside a public building where Carrasco's body lay in state, attended by Rajoy and other leading politicians, while thousands of people filed past the politican's casket to pay their final respects.