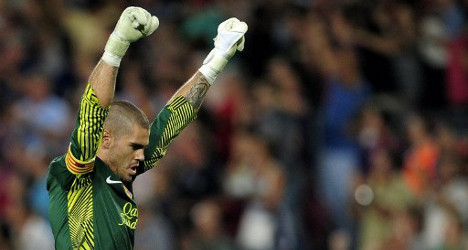 Unfortunately, I could not say goodbye playing football as I would have liked," the 32-year-old Spain international said in the letter. Photo: Josep Lago/AFP

But he still found time to offer his thanks to key figures in his career, including Pep Guardiola and the late Tito Vilanova, while making no mention of under-pressure coach Gerardo Martino.

Valdes, who was sidelined for seven months after surgery for a knee injury in March and had already announced plans to leave at the end of the season, wrote an open farewell letter sealing his departure.

"Unfortunately, I could not say goodbye playing football as I would have liked," the 32-year-old Spain international said in the letter, which was published online on the Barcelona site.

"But that is life sometimes and this year has been cruel for me in that sense," the keeper said.

"Thanks Pep for having opened the door for me to play a game that I did not know, for being my guide on the journey one must take to seek success, which we found together."

Valdes had a special word for the late Tito Vilanova, who died on April 25 after a long battle with cancer.

Vilanova was in charge of Barcelona for just one season after Guardiola's departure but had to step down to pursue his treatment for cancer of the salivary gland.

"Thank you Tito! Wherever you are, I thank you for teaching us not only the way to win as a team but also the strength and character to confront life."

The letter contained no mention of current coach Martino, who admitted to a disappointing season earlier this month when it seemed the team had no chance of winning the league.

"There are times when you ask for a second chance and other times when you don't think you deserve it, so I will see what I think," Martino said on May 3.

Since then, however, a series of surprise results has left Barcelona with a chance of winning the league if they can beat Atletico Madrid at the Camp Nou this Saturday, the last match day of the season.