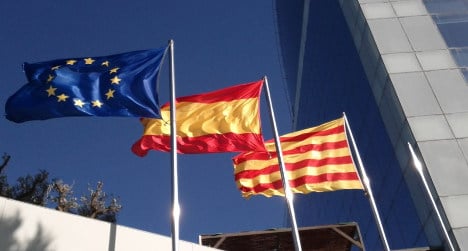 "The Spanish should be up in arms against Brussels, but it isn't the case," says political scientist Joan Botella of Barcelona Regional University. Photo: Scott Smith

Crawling out of a crisis in which European authorities helped bail out its banks but approved pay freezes for ordinary Spaniards, Spain is nevertheless a cheerleader for European integration — a once-marginal state that has done well in the union.

"The Spanish should be up in arms against Brussels, but it isn't the case," says political scientist Joan Botella of Barcelona Regional University.

More than 58 percent of Spaniards are still in favour of the European Union against just under 30 percent who are against it, according to a study published last week by Spain's Centre for Sociological Studies (CIS).

The economic crisis that erupted in 2008 did affect Spanish views of the EU. A European Commission study showed that the ratio of people who thought Spain had benefitted from the EU was much higher at 75 percent in 2007.

That was before Spanish leaders under pressure from Brussels began imposing painful cutbacks to fix the public finances.

"With an unemployment rate festering at 26 percent, public debt soaring to 96.5 percent of output and promises of a recovery that has not yet come, Spain is gasping for oxygen which it is not getting from the European institutions nor its European partners," centre-left newspaper El Pais said in an editorial.

But it added: "Other studies show how deep-rooted pro-European feeling is in Spain."

The country was an economic sick man of Europe and a political pariah under longtime dictator Francisco Franco, who died in 1975.

But it flourished after adopting a democratic constitution in 1978 and joined the bloc less than a decade later, gaining access to precious economic aid.

"Accession to the union meant definitive closure on the dark past of the dictatorship and isolation," El Pais said.

The CIS survey showed 43 percent of Spaniards think the country's accession to the European Union in 1986 benefitted Spain against 31 percent who thought the country had suffered because of it.

Although mistrust of politicians is high after years of political corruption scandals, it does not appear to have put most Spaniards off voting in the European Parliament elections to be held in Spain on May 25th.

Nearly two thirds of Spanish voters — 64.4 percent — intend to cast ballots in its European polls, the CIS study showed. During the last European elections voter turnout in Spain was 44.9 percent, slightly higher than the 43 percent average for the entire bloc.

Unlike bailed-out countries such as Portugal and Greece, "there is no head-on rejection" in Spain, which has "largely benefitted from belonging to the European Union", Botella said.

Spain is one of the biggest recipients of EU subsidies, worth €300 billion ($416 billion) since it joined the bloc.

Half has gone to farmers and much of the rest to infrastructure including the country's high-speed train network, according to the European Commission.

Since joining the EU, "the economic, social and political transformation in Spain has been enormous," says the Spanish foreign ministry.

This is partly thanks to "the enormous quantity of regional and cohesion funds that have accelerated development of most of the Spanish regions", the ministry says on its website.

"There is a feeling in Spanish society that if we were outside Europe we would be much worse off morally, culturally and politically," said Botella.

"Within the EU there may be risks and difficulties but it protects us from our demons."

The poll showed Popular Party would capture almost 34 percent of the vote, giving it 20 or 21 lawmakers in the European Parliament, while the Socialists have 31 percent support, giving them 18 or 19 seats.