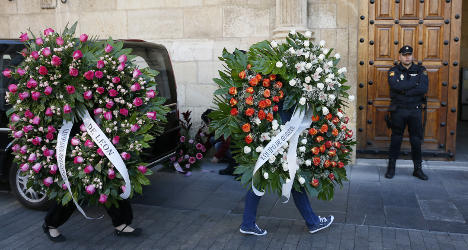 Isabel Carrasco, renowned as a strong character who led the ruling Popular Party in Spain's León province, was shot repeatedly on Monday in what appeared to be an act of personal vengeance as she crossed a footbridge in the university city, police and witnesses said.

Newspapers splashed on their front pages images of her body lying under a white sheet on the bridge, some highlighting concern over growing public hatred of Spanish politicians.

Police arrested the two suspects shortly after Monday's late-afternoon shooting: a 35-year-old woman who lost her temporary job at the León council three years ago, and her 55-year-old mother.

Although no motive for the crime has been officially established, the most popular theory being put forward is one of personal revenge.

The daughter's temporary job with the council had expired when someone else was chosen for the position in 2011, a León city hall source told news agency AFP.

This figure was given as €6,500 by El País newspaper, citing other internal sources.

"There was a series of legal hearings in the past few years which was finally won by the council," the source said on condition of anonymity.

"This woman had to return the money and it seems that was one of the reasons she had serious financial problems."

The two suspects apparently had declined to give a statement to police, who were still hunting for the firearm used in the crime, the source said.

A police official who spoke on condition of anonymity told AFP the mother and daughter remained in police custody in León.

The two women were both members of the Popular Party and were the wife and daughter of a police inspector, government and party officials said.

Under Spanish law, they can be held for up to 72 hours before appearing before an investigating magistrate.

Spain's ruling Popular Party and the opposition Socialist Party suspended campaigning for the May 25th European elections after the shooting.

A televised debate between candidates of the ruling party and the main opposition Socialist Party was postponed for two days until Thursday.

Mourning relatives wept outside a public building where Carrasco's body lay in state, attended by Prime Minister Mariano Rajoy and other leading politicians.

Rajoy issued a statement after the killing, decrying it as a "wretched crime" and stressing that the authorities were working to bring the perpetrators to justice.

The family of the murdered politician had requested privacy for an evening funeral service, local Popular Party sources said.

The shooting appeared to be a work-related act of revenge, according to officials, but "it occurred in a climate of growing ill-will towards the political class", said an editorial in conservative daily El Mundo.

Many people believed politicians were at the root of all their problems, it said.

"We don't want to say it was the cause of the crime but it must be said that this breeding ground helps to erode the relationship with politicians, who are now seen as enemies."

Numerous Popular Party officials were assassinated in the 1990s and early 2000s in killings blamed on the Basque separatist group ETA, which announced an end to violence in 2011.