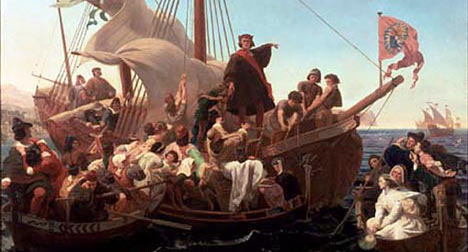 While continuing their journey around the 'New World', The Santa María ran aground off the present site of the city of Cap Haitien in Haiti. Photo: Wikipedia

The Santa María is said to have been lying at the bottom of the sea near the coast of Haiti ever since it was shipwrecked more than 500 years ago.

If proven to be one of the vessels with which the Genoese explorer reached America, it could be one of the most important underwater archaeological discoveries of recent times.

So far, the team of archaeologists from the US has carried out non-invasive work on the shipwreck, measuring it and photographing it.

Lead investigator Barry Clifford used Columbus’s own diary and the results from another team of archaeologists to determine where the shipwreck could be, The Independent reported on Tuesday.

"It will be a wonderful opportunity to work with the Haitian authorities to preserve the evidence and artifacts of the ship that changed the world," Clifford told the UK daily.

The shipwreck site also matched with the historical knowledge of the topography associated with the Santa María’s disappearance as do the local currents which were said to have carried the vessel away.

The Santa María, the largest of the three ships used by Columbus on his first voyage to America, was built in either Cantabria or the Basque Country in the second half of the 15th century.

Its crew was said to be made up of men from the port of Palos de la Frontera in Andalusia and the northern Spanish region of Galicia.

In 1492, Columbus hired the ship under the sponsorship of Ferdinand and Isabella of Castile and set sail from Spain’s southern Atlantic coast.

After restocking provisions and water in the Canary island of La Gomera, Columbus and his fleet continued their search for a new western route to Asia.

Thirty-seven days later, they arrived in the Bahamas.

While continuing their journey around 'the New World', The Santa María ran aground off the present site of the city of Cap Haitien in Haiti.

Some historical reports say Columbus ordered part of the timber from the Santa María to be used to build a fort which he called La Navidad, as the shipwreck occurred on Christmas day.