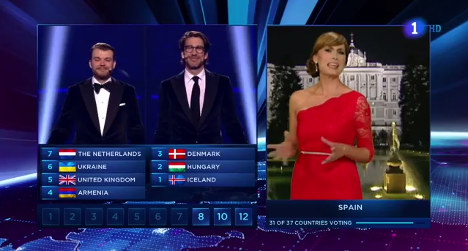 Carolina Casado has become the new figure of fun for Spaniards on the lookout for public speech fails in English.

The young TV presenter appeared on screen during Saturday’s Eurovision song contest when it was Spain’s turn to hand out points to the contestants.

Beginning her speech with a broad Spanish accent, Casado made her first mistake when pronouncing "Europeans" as "Europans".

After a nerve-wracking suspense brought on by a delay in the audio signal between Copenhagen and Madrid, she stammered slightly and then announced: "Oit (8) points go to Romania!"

Although most of Spain’s media coverage has been centred on Austria’s victorious drag singer Conchita Wurst, Casado’s mishaps in English have been also been widely reported.

"Nerves and technique got the best of me," Spanish daily ABC quoted Casanova as saying.

Other Spanish newspapers criticized the performance with words like "blunder" and "feeble English".

The TV presenter and journalist has also been the butt of hundreds of jokes on Twitter and Facebook, under the hashtag #oitpoints.

"From the people who brought you #cafeconlecheinplazamayor, we present #oitpoints. Yes, sir!

She has since apologetically tweeted: "I promise I’d studied the speech, I’m grounded at home now".

The media storm her minor language mishaps have generated illustrate how many Spaniards feel almost ashamed of the image their public figures and politicians give abroad when speaking in English.

Madrid’s mayor Ana Botella has been at the centre of this informal campaign against broken English since last September when she famously told the International Olympics Committee there was "nothing quite like a relaxing cup of café con leche in Plaza Mayor".

Her ‘Spanglish’ speech for Madrid’s Olympic bid campaign went viral, with everything from musical remixes and comical memes mocking her accent.