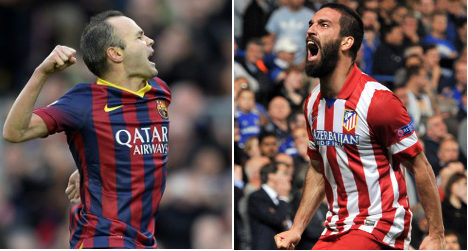 Barcelona's Andrés Iniesta and Atleti's Arda Turan will battle it out in the most exciting league finale seen in Spain in many years. Photo: Lluis Gené/Glynn Kirk/AFP

Barcelona Gerardo Martino believes playing at home could give his side the edge as they look to snatch the Spanish La Liga title away from Atletico Madrid by beating their rivals next Saturday.

The fight for the title will go to the final weekend after Atletico failed to take advantage of Barça's 0-0 draw away to Elche as they were held 1-1 at home to Malaga.

Atletico lead Barça by three points, but the Catalans will take a 23rd La Liga title with victory thanks to a better head-to-head record.

"We are going to need the support of the fans so that the players on the field can feel it and feed off it," Martino said.

"It has not been a season in which we have shone a lot, but with the help of the fans we can win the league."

Barcelona had started brightly against Elche as Andres Iniesta struck the bar with a volley from outside the box, but they were stifled by the hosts' well-organised defence throughout.

And Martino admitted that he was afraid to risk everything in search of the three points as losing would have ended Barça's title challenge.

"It was one of those matches in which you have a strange feeling, especially after Andres' shot," he said.

"We began to make mistakes and sometimes lacked the patience needed due to desperation. We were playing with the result in our game and that with Atletico. At the end we didn't know if we should risk too much or if a goal from them would take us out of the race."

In the end it was Atletico who ended the day disappointed as they missed the chance to seal their first La Liga title in 18 years by only managing a point at home to Malaga. However, they have yet to be beaten by Barça in five meetings between the two in all competitions this season and Atletico captain Gabii remains confident they can get the point they need at the Camp Nou.

"We still believe in this team," Gabi said. "We are Atletico and we are going to go there to win. We wanted to be champions today for all our fans, but we will give everything in Barcelona to do it and we are used to playing finals."

Atletico boss Diego Simeone hailed his players' efforts despite failing to get the win they needed and said he would have been delighted with the situation they find themselves in at the start of the season.

"If you had told us at the start of the season that we would play the last game in the Camp Nou with a three-point advantage over Barça no one would have believed it. Now, like in every final, there is a 50-50 chance for both teams.

"We remain humble, but what this team has done has been marvellous and come about thanks to a huge effort. Hopefully we can round it off at the Camp Nou."