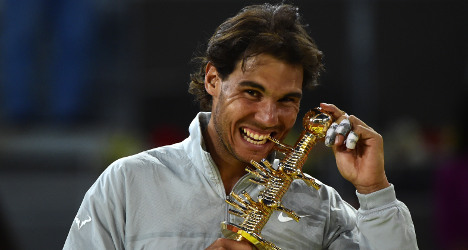 Rafael Nadal said his opponent Kei Nishikori needed to get over injury problems to be at the very top of the game. Photo: Pierre-Philippe Marcou

Nishikori, who is 24 years old, had to retire from his Madrid Masters final against the world number one when the back injury which had required treatment throughout the week flared up again on Sunday.

"Kei promised a lot of things, promised a lot a couple years ago, and he's still very young. He has had a couple of injuries. Whenever you suffer injuries everything is really complicated," said Nadal.

"But to be No. 1 he has to show if he's capable of playing with high regularity all year and being able to win on all surfaces."

Nishikori, who will be the world number nine on Monday, has been working with former French Open champion Michael Chang and the partnership paid dividends with a claycourt title in Barcelona last month.

But injury problems are never far away for the Japanese player. He was forced to withdraw from his Miami Masters semi-final against Novak Djokovic in March with a groin injury.

In 2012, he had to skip the French Open with a stomach injury.

Despite the setbacks, Nishikori believes he can still be a force at this year's French Open which starts in Paris on May 25th.

Last year, he became the first Japanese man to make the fourth round since 1938.

"It's going to be very exciting at the French because I never feel like this on clay," said Nishikori.

"I am very confident. I can hit from either side forehand or backhand, so it's very good feeling I have on clay right now.

"I have been playing better tennis from last year, but this year it's much different. I am more offensive, aggressive, playing from both sides, and, yeah, playing really confident right now."