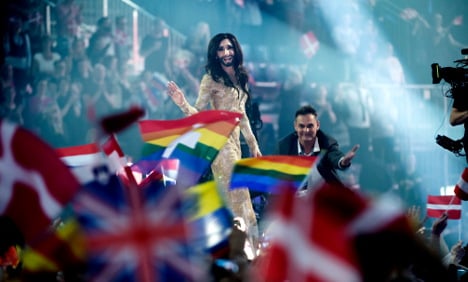 Sometimes they use these mad props – a fire extinguisher, for example – for literally no discernible reason. Samuel Johnson said a man who is tired of London is tired of life – well, a person who is sick of Eurovision is either lying to themselves, or in the midst of some kind of nervous breakdown.

Speaking of people who don't like Eurovision: apparently the neo-Nazis hate it, my German friend told me so. And you can kind of see why, I thought, as I watched the winner of last night's show singing away.

I don't think this is specifically to do with Conchita being a beautiful skinny man in a glorious dress with a huge beard and skinny men in dresses with beards being something which requires a lot of tolerance, although that surely plays a role.

But there was an even greater, almost spiritual vulnerability about Conchita, I thought. You couldn't really hate anything or anyone while Conchita was singing.

This year was actually, for Eurovision standards, surprisingly non-camp. First up were Ukraine, with a cheerful song called Tick-Tock, followed by Belarus with Cheesecake.

Eurovision really does have educational benefits too – if it weren't for the song contest, I'm sure most people would never have realized that Azerbaijan, who were represented by Dilara Kazimova singing a slow number and had a person wriggling about on a trapeze in the background, is (kind of) in Europe.

Iceland came on with a jolly, rocky little song with a nice anti-prejudice message. And then Norway went for melancholy and moving – Carl Espen, a former UN soldier in Kosovo who works as a doorman at a heavy metal disco and was incredibly sexy sang “Silent Storm”, a song that had been written especially for him, apparently.

It was a bit depressing, violins and sadness are usually a bad combination. They could've done with a few props, I felt, to liven things up a bit, distract us somewhat. Maybe someone in a tiger costume on a fire extinguisher or something?

Romania sent Paula and Ovi, who, by the way, came third the year Lena won for Germany in 2010. All the Germans who were so snide about sending Lena twice, take note.

The duo's song was called Miracle, and it kind of sounded like a Tampon advert soundtrack, although my best friend and viewing companion claimed that tampon ads sound catchier.

Armenia's was a bit boring, Montenegro had ice-skating. But I was just starting to think that this year's Eurovision was the least camp, the least gimmicky, the least fabulous of all the years I'd ever seen when along came Poland.

Their song was in Polish but the title was “We are Slavic!” It was a rumptious, bombastic number involving very beautiful women with gorgeous figures doing housework chores in an almost painfully arousing way.

Next up was Greece, with Freaky Fortune performing Rise Up, featuring a rapper from London. I thought this was genuinely quite good, almost like a normal song, possibly just the London connection shining through though.

Austria's Conchita Wurst performed Rise Like A Phoenix and the whole of Europe fell in collective love. Germany followed Austria with a nice enough song from a nice enough girl – not the worst thing anyone has ever sung, but nothing special.

Sweden were my favourites to win with their generic love song and Celine Dionny vocals. I bet my son ten cents they'd win. France's song was – yay! In French! Almost absolutely everyone else sang in English.

“Is it racist that the only black guy is half-naked and has tribal stripes on his face?” The best friend asked. I chewed thoughtfully on my lip. “Surely not?” I said. “Maybe it's meant to be sending up racism in French society!” The best friend said generously.

Russia sent along two ridiculously tall 17-year-old identical twins who did a mirror-performance and had their hair stuck together. It was fairly high on the fabulous-o-meter. Also at one point it sounded like they sang “Shine into my tardis!” This is exactly what it sounded like, and probably the first Doctor Who reference in Eurovision history.

Italy's entry was fairly boring, she had an incredibly short skirt on, though. Slovenia's was barely worth mentioning. Spain sang in Spanish – a soaring ballad. Switzerland performed a cheerful, bouncy number – Hungary, though, offered up a sad song called “Running”, telling the tale of an abused child. The lyrics were depressingly detailed, I quite liked it though.

The Netherlands followed with a duo on guitars, singing a country ballad and staring lovingly into each others' eyes. I was majorly bored but the German commentator really, really loved this song, he was a huge fan. Eurovision's educational benefits continued when San Marino performed. “I have literally never heard of this country,” I told my best friend. “I have,” she said, knowledgeably. “It's in Italy. It's about the size of Neukölln in Berlin.” Geographical discoveries led to me not taking any notice of the song whatsoever, but they ended up coming third, so looks like Europe agreed with me.

And last but not least: the United Kingdom. I really think they don't want to win. Every year they send the worst song of the night, or thereabouts: Children of the Universe. A total embarrassment. Even more embarrassing: I voted for it twice, purely on patriotic grounds.

The voting was totally exciting, because although Austria zoomed into the lead, it was pretty close almost all the way through.

Lots of booing for Russia – I was a bit surprised at that. Was there booing in the 90s during the Yugoslav Wars? I'm too young, I can't remember.

The Netherlands came second and Sweden, my second favourites to win, came third. France came last – maybe they'll sing in English next year? Germany came in at Number 18 – one place behind the UK. Not bad.

Austria won, and they deserved to, too – it was a victory for vulnerability, emotional songs and also for the right of men in beards to wear dresses if they want to.