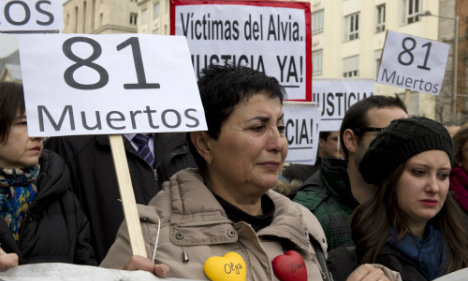 Judge Luis Alaez, who is investigating the accident, said in a ruling he wants to question current and former Adif officials about why there was no automatic braking system in the section of the track were the accident happened.

The train was hurtling round a bend at 179 kilometres per hour (110 mph), more than twice the speed limit for that stretch of track, when it tore off the rails near the city of Santiago de Compostela on July 24th, according to its data recorders.

Alaez said a European Rail Traffic Management System should have been installed on this stretch of railway to force trains to break automatically if they exceeded the speed limit.

The 11 Adif officials "knew or should have known the deficit in safety or the increase in risk this meant for circulation on a section of the track that Adif itself defined as being high-speed," he wrote.

Among the officials summoned to court is former director general Carlos Maria Juarez Colera. They will appear on May 22-23th and 26-28th.

The driver, Francisco Jose Garzon Amo, ended a telephone conversation with the on-board conductor 11 seconds before the train flew off the tracks and ploughed into a concrete siding, coming to rest in a mangled heap.

Garzon has been provisionally charged with 79 counts of reckless homicide. He has been released under court supervision while the investigation into the crash continues.

Adif and Renfe, the state company that runs the trains, have denied any wrongdoing or technical failings.