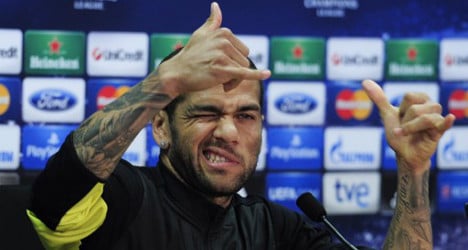 Alves won praise after he took a bite from the banana and got on with the game, drawing worldwide attention to racist incidents in Spanish football. Photo: Josep Lago/AFP

The young man is accused of throwing a banana on the pitch near the 30-year-old Alves as he was about to take a corner during Barcelona's 3-2 away win at Villareal on April 27.

Alves won praise after he took a bite from the banana and got on with the game, drawing worldwide attention to racist incidents in Spanish football.

“My only concern is that the kid lost his job and I don't want that. I don't want to hurt anyone. He made a joke and it caused an uproar,” Alves told Catalan radio RAC 1 in an interview on Thursday.

“I ask that they give him his job back,” he added.

Spanish police arrested the suspected culprit, who could face up to three years in jail if convicted of inciting discrimination.

Villareal banned the man from their facilities and stadium and cancelled his club membership.

Spanish newspapers said the suspect was a member of the support staff of a junior Villareal team, and thus lost his job through the sanction.

Villareal declined to comment on the matter to AFP so as to protect the suspect's identity.

Spanish football authorities fined Villareal 12,000 euros (about R171 000) on Wednesday but the Spanish government's anti-violence commission has said it will appeal for a heavier punishment given the “seriousness” of the incident.

Alves said he did not want to give the impression that the whole of Spain is racist.

“It is not something that has just happened now. I don't want to generalise, to say Spain is racist. I am saying there is racism in Spain. I have been here 11 years and in those 11 years it's been the same, people call me a monkey,” he said.

Just a week after the banana-throwing incident, Levante's Senegalese midfielder Pape Diop condemned Atletico Madrid fans for making monkey chants at him during his team's shock 2-0 win over the La Liga leaders.