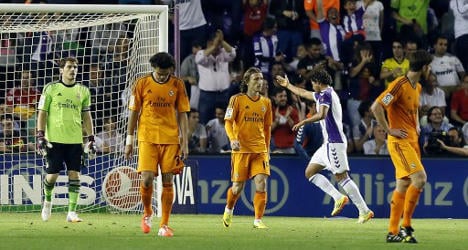 Sergio Ramos' free-kick had given Madrid the lead 10 minutes before half-time, but Humberto Osorio's late header rounded off a horrible evening for the visitors as Cristiano Ronaldo also hobbled off with an injury.

The draw leaves Real four points behind leaders Atletico Madrid and a point adrift of Barcelona with two games to play.

Real will be mathematically out of the title race should Atletico win at home to Malaga on Sunday and Atletico could be crowned champions for the first time in 18 years should Barcelona also drop points away to Elche.

"It is a shame that with two games to go and all the effort we have put in that it is almost impossible to win the league," Ramos told Canal Plus.

"We failed to kill the game off, but it wasn't for the want of trying. The league is practically lost, but whilst mathematically it is still possible Real Madrid is obliged to fight."

Real boss Carlo Ancelotti said he didn't believe Ronaldo's injury was too serious, but he also has injury worries over Pepe and Angel di Maria as they both ended the game with problems.

"We will have to see in the next few days with all of them," said the Italian.

"I don't think Cristiano's problem is a big thing, but Pepe didn't end the game in good shape and we will see with Di Maria, although that shouldn't be too serious either."

Sections of the Spanish press were quick to criticise Ancelotti for making two defensive substitutions in introducing Asier Illarramendi and Marcelo for Isco and Karim Benzema respectively in the final quarter.

And he admitted his side sat too deep as they attempted to protect their lead in the final stages.

"We lost control, but I don't think it was a lack of attitude on the players' part.

"Iker (Casillas) didn't have a save to make in the whole game. I think the team played well, but at the end it became more difficult. We sat back too much and defended too deep and in the end conceded a goal from a set-piece."

Casillas was back in goal in a La Liga match for the first time in 17 months, but he nearly had to pick the ball out of his net after just five minutes when Javi Guerra's header from close range clipped the outside of the post.

Madrid then suffered a huge blow when Ronaldo limped off to be replaced by Alvaro Morata.

The Portuguese punched the top of the dugout in frustration as he left the field and could now miss the rest of Real's league season to ensure he is fit for the Champions League final against Atletico on May 24.

In Ronaldo's absence Sergio Ramos took on free-kick duties and continued his tremendous scoring streak of late with his fifth goal in four games as his dipping free-kick had to much power for Jaime in the Valladolid goal.

Ramos could even have had a second before half-time as his header from Luka Modric's corner flew just wide.

The visitors had to withstand some concerted pressure from Valladolid in the second period as Guerra saw an acrobatic overhead kick fly inches past 25 minutes from time.

And the hosts finally got their reward when Alvario Rubio's corner from the right was powered into the far corner of the net by Osorio.

The result could have been even better for Valladolid as Zakara Bergditch led a three-on-one counter-attack moments later, but the Frenchman's final pass was cut out by the covering Pepe.