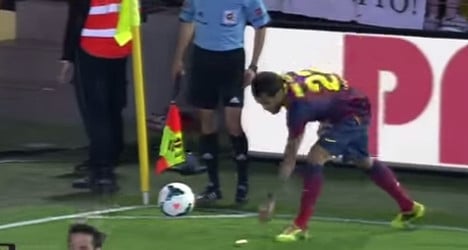 A week after the Alves incident, Levante's Pape Diop reacted by dancing when he was targeted by monkey chants during his side’s 2-0 victory over Atletico Madrid.Photo: YouTube

The Spanish Royal Football Federation’s disciplinary body imposed the fine but stopped short of ordering the club’s stadium to be closed, the source who asked not to be named told AFP.

International outrage erupted after the banana landed on the pitch near 30-year-old Alves during the league clash at Villareal’s Madrigal stadium on April 27.

The federation took into account “the praiseworthy and firm decision by the club to deny entry” to the stadium for life to the fan who threw the banana, the source said.

Alves won praise for nonchalantly picking up the banana and taking a bite before setting up a goal to help Barcelona come from behind to seal a 2-3 victory.

“I have been in Spain 11 years and it has been the same for 11 years. You have to laugh at these backward people,” Alves said after the game.

The club had already received a warning from the disciplinary body in February over fans’ behaviour after a smoke bomb was thrown on the pitch causing the team’s stadium to be evacuated.

A week after the Alves incident, Pape Diop, a 28-year-old Senegalese player for Liga side Levante, reacted by dancing when he was targeted by monkey chants during his side’s 2-0 victory over Atletico Madrid.