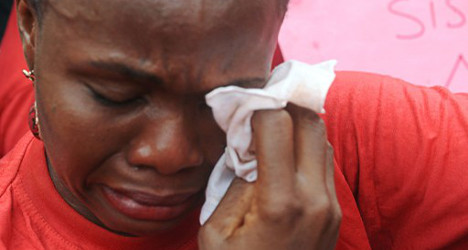 One of the mothers of the missing Nigerian school girls wipes her tears during a rally by civil society groups pressing for the release of the girls in Abuja on Tuesday, ahead of World Economic Forum.

Software already exists to match missing people with their relatives, and it has been used worldwide to identify and return more than 740 children who were trafficked, some across international borders.

Most of all, forensic scientists in the United States and Spain say they are ready to help, free of charge. All they need to get started are DNA samples from family members of the lost schoolgirls, scientists told news agency AFP on Tuesday.

"We would do this absolutely for nothing," said Arthur Eisenberg, chairman of the department of molecular and medical genetics at the University of North Texas (UNT).

"This is clearly a humanitarian effort," said Eisenberg who heads the UNT Center for Human Identification, the laboratory that works with a 10-year-old international program called DNA-Prokids, which aims to reunite families and deter human trafficking.

First, the girls' family members — mother, father or another close relative — could provide a DNA sample by swabbing the inside of their mouths with a cotton tip or giving a blood sample.

Then, Eisenberg said, he and colleagues establish DNA profiles of the families using a software system called M-FISys (pronounced "emphasis").

The software was developed in the aftermath of the September 11, 2001 attacks to help forensic scientists in New York City meet the enormous challenge of matching nearly 20,000 pieces of human remains to the more than 2,700 people who died in the Twin Towers.

Prior to 9/11, no such software existed. Forensic experts were overwhelmed by the scale of the identification effort, and quickly learned that Excel spreadsheets were not sophisticated enough.

"No one is giving up any confidential information that they might not be able to under their local statutes," M-FISys developer Howard Cash told AFP.

That capability is important because the group that took responsibility for the Nigerian kidnapping, an Islamist faction called Boko Haram that is opposed to Western education, has threatened to "sell them in the market."

The US State Department has said there were indications that the girls, taken from Chibok on April 14, had been moved into neighboring countries.

Local leaders have said the hostages, aged 16 to 18, were sold as brides to Islamist fighters in Cameroon and Chad.

If true, that means a key part of the identification process may come down to the actions of good Samaritans.

Anyone who encountered a girl they suspected was one of those kidnapped could take a DNA sample from her mouth, blood or hair, and provide it to authorities so it could be analyzed to see if it matched any of the missing girls.

Even if Nigeria does not have a forensic lab ready to handle such a task, Eisenberg and DNA-Prokids founder José Lorente said they could ship kits for collecting saliva, blood or hair samples, which could then be sent to their labs in either the United States or Spain.

DNA-Prokids was developed in 2004 by Lorente, a forensic expert and doctor who heads the University of Granada Genetic Identification Laboratory.

Lorente said he was first motivated to use DNA to track missing children many years ago, after seeing scores of street kids begging for money during his international travels.

He asked police what had happened to these youths, and learned that often they'd been stolen or sold as babies. After so many years had passed, their families would no longer recognize them, so they were unlikely to ever be found.

"Of course, I started to think about the DNA," he told AFP. "There is a way to identify them."

DNA-Prokids has since been implemented in Mexico, Brazil, Guatemala, El Salvador, Honduras, the Dominican Republic, Peru, Nepal, Sri Lanka, the Philippines, Thailand, Malaysia, Indonesia and a handful of other countries.

The program is credited with helping stop a surge of illegal adoptions from Guatemala to the United States, as well as identifying hundreds of illegally trafficked children.

An estimated 27 million people are living in slavery around the world, in the second largest international criminal industry after drugs.

Lorente and Eisenberg said they have reached out to local authorities to offer their help in Nigeria, where another eight schoolgirls were kidnapped by gunmen on Tuesday.

Meanwhile, US Secretary of State John Kerry pledged to send an expert team to help with the search and rescue operation, an offer Nigeria accepted.

According to Gary Weaver, an expert in cross cultural communications at American University, the parents of the kidnapped girls would not fall likely prey to superstitions or fears of voodoo from providing DNA samples, as may be the case in some traditional societies.

"The thing to remember is the parents of these girls are fairly sophisticated. I mean, they are sending their girls to get an education," he said.

"There is nothing in Islam that forbids this."