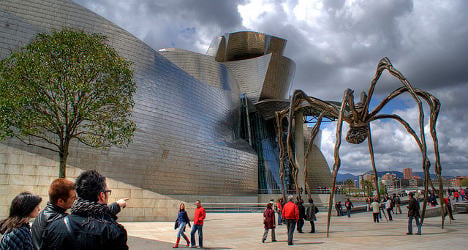 The 85-year-old Canadian-born American beat out 36 candidates from 19 countries to take the prize. By doing so, he became the sixth architect to claim the prize awarded by the Prince of Asturias Foundation.

Gehry's titanium covered Guggenheim Museum in Bilbao is his best-known work. Opened in 1997, it has helped breathe new life into the city, drawing millions of visitors every year.

In Spain, Gehry has also designed the Marqués de Riscal hotel in Elciego, also in the Basque Country.

Other high-profile works include the Walt Disney Concert Hall in Los Angeles and the Dancing House in Prague.

Gehry's designs have received over one hundred awards around the world. He has been handed more than a dozen honorary degrees.

Spain's Prince of Asturias Awards are given to individuals and institutions, whose work in cinematography, theatre, dance, music, photography, painting, sculpture, architecture or any other form of artistic expression constitutes an outstanding contribution to the cultural heritage of mankind.