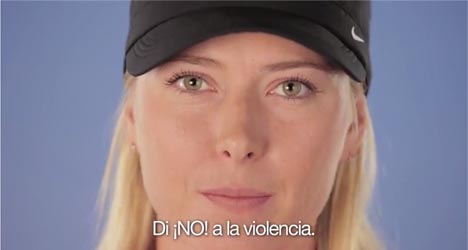 Maria Sharapova is just one of the many famous female tennis players featured in the video. Photo: Screengrab/YouTube

Top ranked players Serena Williams, Na Li, and Agnieszka Radwansks are featured in the video denouncing violence against women in their native language with subtitles in Spanish.

This video was created by the agency ‘101’ in collaboration with the Women’s Tennis Association (WTA) and the Mutua Madrid Open.

With this campaign, the Mutua Madrid Foundation hopes to show its support for mistreated women in Spain where as many as one in five women say they have been the victim of abuse.

The foundation also wants to raise awareness about its economic contributions to seven programs around the country.

These programs include an educational platform in Girona, a smartphone app with the Spanish Red Cross, as well as multiple foundations in Valencia, Barcelona, and Madrid.

The players featured in the video are all playing in the Mutua Madrid Open, which is on now and runs until May 11th.

To find out more exciting events happening in Spain, check out The Local’s guide to what’s on in Spain for the month of May.