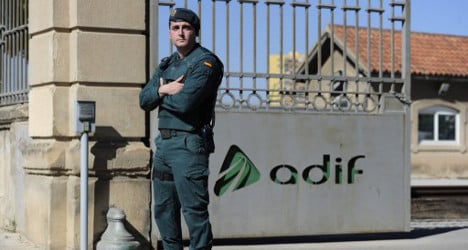 Police also carried out searches at 11 homes and offices as part of their investigation, including the headquarters of state railway company Adif, Spain's public prosecutor's office said in a statement.

The goal of the searches was to "find documents that could reveal possible payments in favour of Adif employees that are different than those which have so far been detected," the statement said.

The nine are suspected of embezzlement of public funds, corruption and document falsification in connection with the construction of the high-speed rail link between 2008 and 2012, it added.

The amount of public money that was allegedly embezzled could be around six million euros ($8 million), the public prosecutor's office said.

Spanish authorities suspect the company which carried out the construction of the high-speed rail link, Corsan, overcharged for the works with the complicity of Adif management, according to media reports.

Spain's high-speed rail network extends for 3,100 kilometres (1,900 miles), making it the second-longest in the world after China's.

The 804-kilometre-long section of the network linking Madrid to Barcelona and the French border was inaugurated in January 2013. Its total cost was put at €3.7 billion ($5.1 billion).