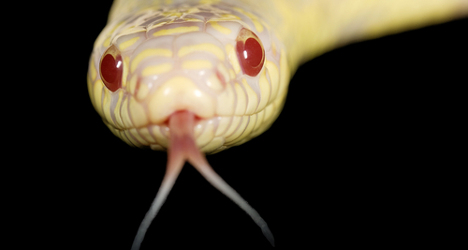 Although not dangerous to humans, the snakes pose a serious threat to the native bird and lizard population of the popular holiday island.

According to UK's Guardian newspaper, this problem began in the 1990s when these rare snakes became a coveted pet. Some of these pets escaped, while others were set free intentionally by their owners.

With a lack of natural predators and a climate very similar to the snake’s native home California, they began adapting and multiplying rapidly.

The giant lizards of the Gran Canaria seem to be especially vulnerable to this invasive species. Experts estimate that the ratio of lizards living in areas with the snakes to lizards in areas without is about one to ten.

Invasive species experts are set to gather on the island this week to discuss methods to control the snakes.

This meeting is part of the four-year plan LIFE+Lampropeltis launched in 2011 that also includes the training of dogs and hawks to help hunt the snakes. It is set to cost more than €1 million ($1.39 million).

The main issue with eradicating this species is that it spends most of its life underground. Hundreds of snakes have been captured this year, but it is likely that there are many more living underground.

So far, this epidemic only affects Gran Canaria, although there have been sightings in Tenerife as well.

California king snake photographer Brian Hinds says that complete eradication is probably not possible. Experts can only hope to control the overwhelming growth of the snake population.

“If it gets any more out of control, it just will become a daunting and unforgiving task that will require a small army," Hinds told The Guardian.