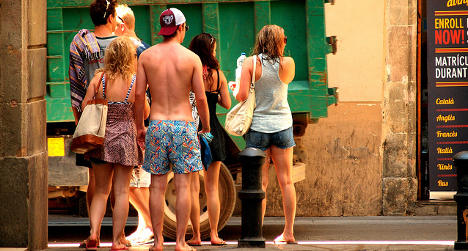 The ban won’t apply to the boardwalk or streets adjacent to the beach. Photo: Zoetnet/Flickr

The draft law is part of a new civic law plan aimed at cleaning up the image of the Balearic island’s capital, Palma.

Set to be passed in the following weeks, it could see people who aren't properly covering the top part of their body having to pay a €600 penalty.

“Obviously the ban won’t apply to the boardwalk or streets adjacent to the beach,” Alvaro Gijón, tourism head for the island’s capital of Palma, said in a press conference.

“(The ban) is for the city centre, shops, museums, public transport and public benches.”

“I’ve never seen this problem in leading (tourism) destinations such as London, Paris, Berlin or Amsterdam, and as we want to carry on being one too, we don’t want to transmit the wrong image.”

A spokesperson for travel agency Luxury Mallorca Holidays told The Local: “Anti-social behaviour is more common in holiday spots like Magaluf and Punta Ballena where young British and German tourists are.

“I think the fines for wearing swimwear in the streets are excessive. It’s not such a big problem for the island’s capital and locals are sometimes just as guilty too.”

Other measures set to be introduced aim to tackle the problem of balcony jumping, the so-called balconing, as well as “fake begging” of a coercive nature, with fines ranging from €200 to €400.

Those who are caught soliciting prostitutes can expect similar penalties.

Locals dog owners could also be fined if they’re caught turning a blind eye to their pooches’ business.