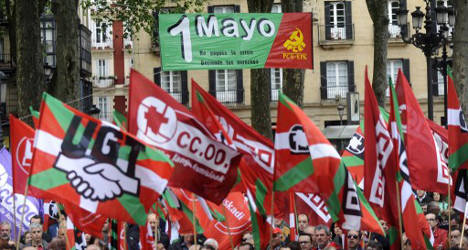 On Wednesday, the Spanish Government headed up by Prime Minister Mariano Rajoy revised up its growth figures for 2014 and 2015 to 1.2 percent this year from 0.7 percent previously and to 1.8 percent in 2015 from 1.2 percent.

The government also predicted the creation of 600,000 in the next two years.

The announcements came hot on the heels of Spain announcing a growth rate of 0.4 percent for the first three months of 2014 — the fastest growth in six years.

But on May 1st, the heads of Spain's largest general workers unions — the UGT and the CCOO — slammed the government's talk of economic recovery.

It was an "immense propaganda operation" that the parties in power were using to "boost their poor chances in the elections," said UGT leader Cándido Méndez, who also described the government's austerity policies as a failure.

"We haven't left the crisis behind," said CCOO leader Ignacio Fernández Toxo.
"There are 24 million unemployed people in Europe…and the unemployment rate in Spain is 25.9 percent after increasing slightly in the last quarter," he said.
Both unions on Thursday called for increased public and private investment and for higher salaries to boost consumption.
"The end of the crisis can't be based on the (German-style) minijobs that push workers into poverty although they have work," said Toxo.
In other Labour Day news, a march in Barcelona turned ugly on Thursday when hooded protesters smashing shop windows and setting containers alight.

Shop fronts and bank branches were damaged when the May 1st marches organized by anti-capitalists groups got of hand, Catalan Daily La Vanguardia reported.

The incident took place at around 7pm on the city's Picasso de Barcelona, the daily said.

The organizers of the demonstration called off their march to avoid further incidents.

In similar news, nine bank branches were vandalized in Spain's Basque Country on Thursday by a group of people with their faces covered, local daily Diario Vasco reported.

One of that group was arrested after he threw a can of paint at police, the paper added.

Labour Day is an annual celebration which marks the rights the achievements of workers, and has its origins in the fight for the eight-hour day movement.