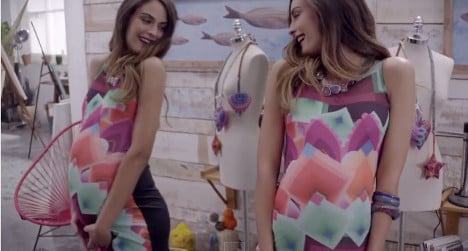 The ad shows an attractive, young woman putting a pillow under her dress and looking at herself in the mirror as she imagines herself pregnant. Photo: YouTube

Charismatic fashion brand Desigual launched its new TV ad for Mother’s day under the slogan: “You decide”, the same one many pro-choicers are using in their protest against Spain’s stringent new abortion laws.

It shows an attractive, young woman putting a pillow under her dress and looking at herself in the mirror as she imagines herself pregnant.

It then cuts to close-up of her with a pin in her mouth, the uncensored version showing how she pricks the condoms she will presumably use with her partner.

The Spanish public’s response has been overwhelmingly negative, with many young men and women voicing their discontent on Twitter:

"Desigual's ad has left me speechless! It's a good job they've written 'don't try this at home' underneath. You shouldn't joke around with serious issues." @MotherAMagic

"Can you imagine the Desigual ad being for Father's Day starring a man. We'd break the internet" @bruixeta33

"Desigual's ad portrays a desperate woman or maneater, not a mother"  @javihoyos23

Desigual has since decided to cut the scene of the young woman making holes in the condoms from the TV version, showing the before and after as an insinuation only.

The Barcelona-based fashion company on Sunday issued a statement saying they had not intended to "offend viewers".

The firm had wanted to "reinforce the message that was featured in all of their campaigns to date: the power of people to make decisions," the firm said.

"This (latest) ad represented a call for personal liberation and (for people) to follow their dreams," Desigual added.

"Putting a hole in a condom can be a hymn to motherhood. A symbol, a metaphor. The imagination is free to think of the consequences."

The controversial advertisement comes at a time when thousands of Spaniards have rallied to voice their support and disapproval for the government's stringent new abortion plans.

If the draft law is passed, Spain’s ruling Popular Party would only allow abortion in cases of rape or if there is a threat to the mother's health.