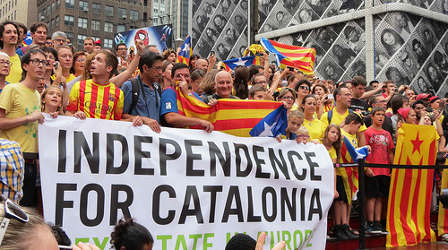 Forty-seven percent said they would vote in favour of an independent Catalan state, while 19.3 percent would give the proposal the thumbs down.

Some 8.6 percent said they would want Catalonia to be a state, but not an independent one according to the Catalan research institute Centro de Estudios de Opinion (CEO).

With a possible referendum coming later this year, one in ten Catalans are still undecided on whether they would vote.

Some 11.1 percent, meanwhile, told CEO they had intention of voting in the referendum.

The survey results come just weeks after the Spanish Parliament rejected a petition by the Catalan government to stage planned November 9th poll on the issue of independence.

In 2013, the Catalan parties Convergence and Union (CiU) and the ERC launched an independence bid with Artur Mas, President of Catalonia, saying a vote on the issue of self-rule would be held in 2014.
The referendum would ask voters two questions:
– "Do you think that Catalonia should be a State, yes or no?"
– "If yes, do you want that State to be independent, yes or no.
Catalonia argues that a 2006 Catalan autonomy statute passed by Spain's parliament granted the region the power to hold referendums.
The April 9th vote in the Spanish Parliament was, however, the latest rejection by Madrid of this argument.
But Catalonia’s regional president Artur Mas has vowed to go ahead with vote.