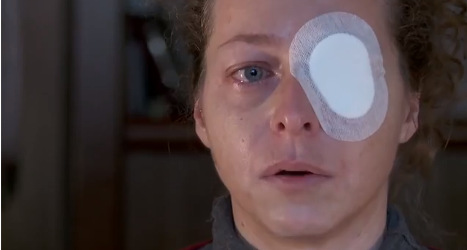 The Catalan government launched a review of weapons used by the police during demonstrations after Ester Quintana (pictured), was injured in 2012. Screen grab: YouTube

The ban on rubber bullets— first announced in November — arrives after around ten instances of people being injured by their use in recent years.

The most high profile case saw a woman blinded in her left eye at a protest in Barcelona during a general strike in November 2012. Ester Quintana says she was struck by a rubber ball fired by police.

Two members of the 'Mossos' police force are under investigation over the incident, but Catalan police and the regional government have denied that rubber balls were used during the protest.

The balls, fired from guns, are used as a deterrent and are not supposed to inflict injury.

The ban on the use of the balls also comes at at time when the Mossos public image is at a low ebb after three people having dying while being arrested by agents in recent months.

Among those deaths was that of gay businessman Juan Andrés Benítez.

Videos of his arrest in Barcelona’s El Raval neighbourhood show how Mossos d’Esquadra police officers holding down the man minutes after he was involved in a fight with a Moroccan couple for reasons which remain unknown.

Benítez lost consciousness while in police custody and died the following day as a result of injuries sustained to the head which in turn had led to heart failure.

Ten officers are now facing charges of homicide over the incident.

On Monday, the head of the embattled regional 'Mossos' police force officially asked for "forgiveness" from anyone who had "been damaged by the force's actions.

"Despite the defence of our individual actions, that doesn't mean we are insensitive to the suffering of those people who have suffered damage," said force commissioner Josep Lluís Trapero during the force's annual day of celebration.

Trapero also went on to express his profound apology to the "family and friends" of those people.

But around 200 officers protested outside the ceremony attended by the top police official.

"We are all Ciutat Vella!" the agents shouted, a reference to the home police station where the ten agents facing charges for the murder of Benítez.

Catalonia's regional president Artur Mas was also booed by the officers during the demonstration.