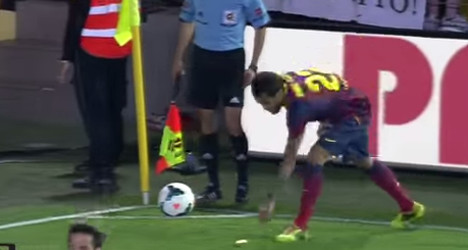 Dani Alves reached down to collect the banana thrown at him during FC Barcelona's game against Villarreal on Sunday. Screen grab: YouTube

Barcelona's Alves made headlines when decided to eat the piece of fruit thrown at him during Sunday's game against Villareal, a reaction he described as "instinct".

That reaction has now become a worldwide anti-racism campaign with footballers celebrities, and even politicians posing in selfies eating bananas to support the cause.

Now the man who threw the banana has been arrested by Spanish police on a charge of inciting hatred.

Twenty-six-year-old David Campayo Lleo was arrested on Tuesday evening in Spain's Castellón province for launching the offending piece of fruit during the 75th minute of Villareal's home match against Barcelona.

He now faces up to three years in prison.

Campayo has also been stripped of his Villareal membership and banned for life by the club, Spain's Europapress news agency reported.

Spain was "very backward" on the question of racism, Alves said in the wake of the incident, before calling for more to done to fight the problem in football.