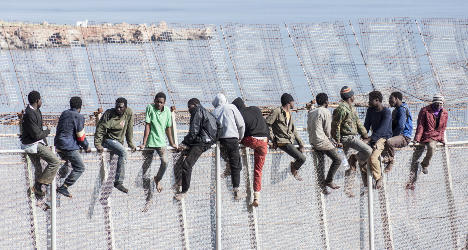 The flow of desperate Africans heading to Ceuta and Melilla has surged over the past year, with migrants regularly storming the six-metre-high (20-foot) border fences. Photo: Blasco de Avellaneda/AFP

Spain has demanded more EU money to strengthen its borders as thousands of Africans try to enter Ceuta and Melilla, two fenced-off Spanish cities on Morocco's northern tip which have the European Union's only land borders with Africa.

Last year 4,235 undocumented migrants crossed into the two territories, up 49 percent from 2,841 in 2012, although the figure was 15 percent down on 2001 figures, the interior ministry said in a statement.

The flow of desperate Africans heading to Ceuta and Melilla has surged over the past year, with migrants regularly storming the six-metre-high (20-foot) border fences.

Others try to smuggle themselves past checkpoints hidden in the undercarriages of cars or sail across the strait of Gibraltar to mainland Spain in flimsy inflatable dinghies.

The government said on Tuesday however that the number of undocumented migrants reaching Spanish shores by boat eased by 15 percent overall to 3,237 in 2013.

The number was also down 90.7 percent on 2006 figures when 39,180 reached Spain by boat, the ministry added for context.

On February 6th around 15 migrants drowned in Moroccan waters while trying to swim to Ceuta from a nearby beach.

In two separate incidents in March, between 800 and 1,000 migrants climbed over the triple border fence at Melilla, authorities said.

Migrants who reach the cities are taken to overcrowded processing centres while authorities decide whether to grant them asylum or send them back to their countries of origin.