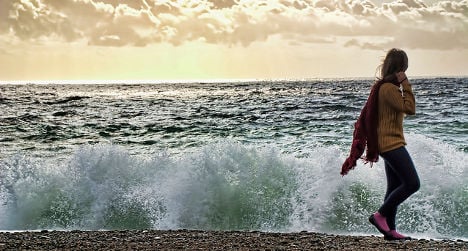 Going going gone? Many expats are wondering if now is the right time to leave Spain. Photo: Jesus Solana

"I could not have survived another winter in Spain financially.

"I looked for work in Gibraltar, but all the work was in online industries and I’m actually an architect by trade so I didn't get anywhere with that — not for a lack of trying.

"And despite making in roads with the architecture, I was constantly being let down by the locals, and of course with the economy the way it is, the building sector in Spain is still dead.

"I really didn't want to leave but you can’t live on peanuts and empty promises."

This is the story of David, sent to The Local via email recently.

David is just one of the around 90,000 UK expats who left Spain in 2013, according to recent data from the country's national statistics institute. Around 40,000 Germans left the country last year as well, with smaller spikes seen in the numbers of Italians and French packing their bags.

These figures have startled many, and have lead to plenty of conjecture about the reasons for this sudden exodus.

Spain's crisis is an obvious answer. With unemployment at 26 percent, and the youth jobless rate at 55 percent, finding work in Spain is not easy.

Then there are the higher income and value-added tax rates Spain has introduced in the last few years.

On top of this are new requirements for foreigners to report overseas income and assets (the so-called Modelo 720 form), a move which has made many expats fear the Spanish government is going to make a grab for these assets.

Also on the the gripes list for expats in Spain is the issue of falling house prices — these have dropped 30 percent since the Spain's crisis began.

Many expats who bought during the boom have been waiting for property prices to recover, but this hasn't happened. Some may be getting out before the situation gets worse, according to the UK's Telegraph newspaper.

The UK daily also believes a demographic shift may be taking place, with older people who came out in the early 2000s when Spain was cheap now in their 70s and wanting to return to the British health system.

For people of working age, there may also be a more general underlying problem.

"Moving to a poorer country (like Spain) should mean having a higher income," David Bartram, Senior Lecturer in Sociology at the UK's University of Leicester told The Local.

"Based on my previous research, that should also make them happier."

But Bartram's recent research showed him this wasn't the case: when he analyzed data on expats from places like the UK living in poorer countries in southern Europe he found they were actually less happy than people who stayed home.

"It is difficult for expats to capture gains from qualifications, with these often not being recognized, and expats often have to move back down the career ladder," he explained.

At the same time there is a language barrier.

"Many people think they won't need to learn the language when they move to a new country because everyone speaks English. But this can be an obstacle in society, both in terms of jobs and life more generally," Bartram said.

"Living as an expat you can feel a lack of connection with the community you live in, especially if you don't have close family around you."

Bartram doesn't believe that the dramatic figures from Spain are happiness-related but does think some people overrate the difference moving to a new place will have.

"You as a person won't change, that person will come with you," he said.

But not everyone in Spain is talking about leaving. Public relations professional Masha Lloyd is one of the many who have no plans to make the move home.

Masha "fell in love" with Spain while a teenager in the 1970s, came to live in Madrid in the early 80s and is definite she'll be staying.

"I have had a bird's eye view of the development of this amazing country from the times when (dictator Francisco) Franco was in power, to the transition to democracy and have lived through both times of economic boom and crisis," she told The Local via email.

"It was never easy to get a job but I always managed and have gone from working as a teacher of English to translator, to being part of marketing departments of multinationals and latterly heading up PR in telecommunications companies," she said.

"Of course it (the crisis) is tough for many people but if you have a job here and a house, there is absolutely no need to go.

"Life is great in Spain; the climate, the food, the people, the very open society with far less rigid rules than in the UK for example. Spaniards live life to the full; enjoying work and play."

"I wouldn't leave for all the tea in China," she concluded.

Even David — forced to leave because he couldn't find work last year — says he'll be back.

"Hopefully, one of two things in the pipeline will come off and my girlfriend will have a job in Spain before the end of the year. Will I be back in Spain as soon as possible? You bet I will," he said.
Don't miss stories about Spain, join The Local on Facebook and Twitter.