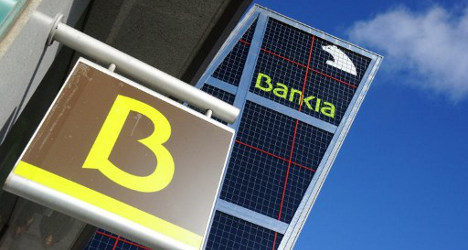 The lender said its net profit during the first three months of the year rose to €186 million ($257 million) from €74 million during the same period in 2013.

Net interest income, or earnings from loans minus funding costs, jumped 36 percent to €698 million, while its rate of bad loans as a portion of total credit fell to 14.3 percent in the first quarter from 14.7 percent in the final quarter of last year.

Bankia became the symbol of Spain's financial crisis when it lost more than €19 billion in 2012, which pushed Madrid to ask its eurozone partners for €41 billion in rescue loans to shore up the entire banking system.

Spain has pumped €22.5 billion  into the bank, which was born in 2010 from the merger of seven troubled regional savings banks.

The Spanish government launched the privatization of Bankia in February with the sale of a 7.5-percent stake for €1.3 billion.

The sale lowered the Spanish state's holding in the bank to about 61 percent.

Bankia was hit hard by the sliding value of assets it had accumulated during Spain's 10-year property bubble, which burst in 2008.

After listing on the Madrid stock exchange with great fanfare in July 2011, Bankia had to be nationalized less than a year later to save it from collapse as bad loans and losses spiralled.