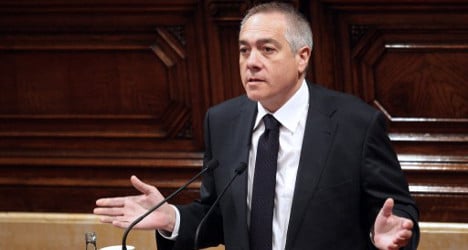 According to Spanish TV channel Antena 3, the socialist politician called for his entourage to let the woman go after the attack. Photo: Quique García

PSC Secretary General Pere Navarro was approached by the disgruntled woman on Sunday morning while he was attending the first communion of a family member in the city of Terrasa.

She first punched Navarro in the face and then called him a “massive son of a bitch”, Spanish news agency EFE reported.

According to Spanish TV channel Antena 3, the socialist politician called for his entourage to let the woman go after the attack.

“She isn’t an unbalanced or homeless person,” he added in response to claims made on several social media sites.

Navarro labelled the attack as “politically transcendent” and said it was a result of “the current climate of tension” in Catalonia over the region’s independence debate.

His party, the Catalan equivalent of Spain’s socialist PSOE party, is officially opposed to the separation of Catalonia from Spain as is currently being proposed by Artur Mas, regional president and leader of Convergence and Union.

There have however been some internal divisions in his party, with some members backing the independence bid.