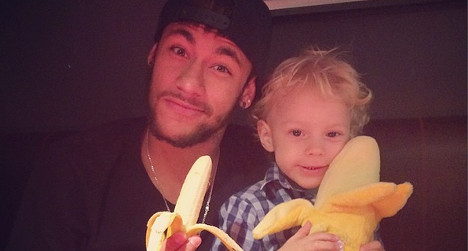 “We are all monkeys, we are all the same. Say no to Racism!!” reads the photo caption below the photo posted by Neymar. Photo: Instagram

The Brazilian full-back picked up the banana as he prepared to take a corner (see the video here) in his side’s match at Villareal on Sunday, and rather than take offense to the racist jibe, he gobbled up the fruit in one bite.

“You have to laugh at these backward people.

"We are not going to change it, so you have to take it almost as a joke and laugh at them."

Support for Alves’ witty reaction immediately starting appearing on Twitter and Facebook from all corners of the world.

Brazilian teammate Neymar is now leading the way in a support campaign for Alves after he posted a picture on Instagram of himself with his two-year-old son eating a banana.

“We are all monkeys, we are all the same. Say no to Racism!!” reads the photo caption.

Spanish TV newsreaders and presenters have joined the campaign and bitten in to the fruit on camera as a way of symbolizing their admiration for Alves’ nonchalant approach.

The breakfast team for national broadcaster TVE support the campaign.

Even Italian Prime Minister Matteo Renzi has gotten in on the act, sharing a banana with Cesare Prandelli, coach of the national football team on Monday. But renowned football journalist John Carlin — who writes about Spain's football league in both English and Spanish — was doubtful about the success of the 'banana' campaign.

"Pigs will fly before the Spanish Government investigates racism in football," he wrote in an editorial published on Monday.

The country is still "in the Stone Age" on the issue, he added.

Villarreal have however given a lifelong ban to the season ticket holder who threw the banana after being identified "with the help of security personnel and fans" present at the stadium, the club said in a press release on Monday.