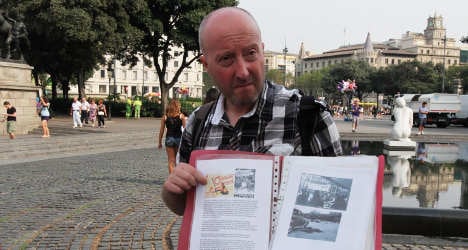 Englishman Nick Lloyd first came out to Spain over 20 years. After brief stints in Zaragoza and Salvador Dali's hometown of Figueres, he settled in Barcelona.

It wasn't love at first sight, but the city has grown on Nick in the two decades he's lived in the Catalan capital.

For most of his time in Spain Nick taught English but five years ago, he had what he describes as a "Eureka moment": he would start running Spanish Civil War tours.

The self-taught historian hasn't looked back since.

The Local spoke to Nick recently about his tours and what it takes to be a successful guide in Spain.

Can you tell us how you came to make a living as a tour guide?

It all started about ten years ago when they put a plaque commemorating (Barcelona photographer) Francisco Boix in my street, saying that he was the only Spaniard to have testified at the Nuremberg trials (where Nazi where criminals were prosecuted).

The local library was also named after him, and this really sparked my interest in the history of the city.

About five years ago I started putting together a list of places on a map, and some time after that is when I had my Eureka moment and decided to start running Civil War tours .

Did the business take off straightaway?

The first 18 months or so were slow. I would have a few people a week. But the last two and a half years have been really busy.

I now have anywhere between two and six tours a week, and sometimes more than one a day, although that's not ideal as the tours last from three to four hours, and can be emotionally quite intense.

I have a maximum tour size of about 15 people, but sometimes foreign schools get in touch with me directly, and I take classes around.

How do you advertise?

It helped that I had my (IberiaNature) website already. That site has quite a high profile so when I advertised my tours there, I went straight to the top of Google's rankings.

I also work together with Barcelona Turimse, the official city tourism agency, and they organize bookings for me.

That was actually quite a difficult process, forming the connection with them. It was a case of me going in to argue my case.

I thought they weren't going to take on my tours, but finally they said," OK. We just wanted to be sure that you're not just in it for the money."

An article published in the (UK newspaper) the Guardian also helped.

At the same time, word of mouth is obviously very important and TripAdvisor plays a huge role. They give me about 20 to 25 percent of my customers, and I make sure I write back to everyone who comments on my tours.

TripAdvisor rates your tours at number one among 386 available activities in Barcelona. What do you put your success down to?

I think it's relatively easy when you do a different kind of tour.

I hope it doesn't sound too pretentious, but what I do isn't really tourism. It's actually walking history lessons.

Running a tour is a bit like writing a book and to construct a good novel, you need lots of different threads, you need spoilers and you need to go back and forth between events to create a good narrative.

In that sense, being an English teacher in the past has really helped. If you've studied teaching English to a certain level, you learn about storytelling and also about how to relate to groups of people.

At the same time, every tour I do is different, because the questions are always different — and it's very much a shared experience. I always try and connect the history of Barcelona in the Civil War with the history of the people I'm taking around.

Have you had any bureaucratic hurdles in your job?

I haven't, no. At the moment, I can work on the streets on the Barcelona as a tour guide without having the official certification — although that could change.

What I can't do is enter national monument,s because I don't need to.

In terms of paying tax, I am registered as self-employed, or autónomo.

You also run tours in Catalan for locals of Barcelona. That means your Catalan must be great?

It's not that great, but people are very kind to me here because I'm a foreigner!

But the truth is, with the Catalan tours I just jumped straight in at the deep end.

When you want to get advanced speakers to improve their language skills, you just need to put them in a really difficult situation.

Nick Lloyd's new book, Forgotten Places: Barcelona and the Spanish Civil War, will be available on Kindle in June.