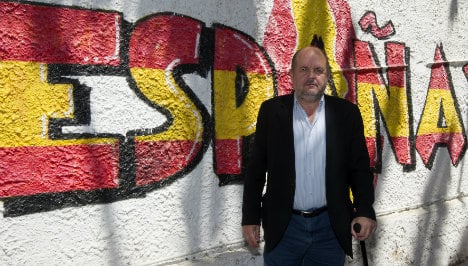 In Spain — where one in four workers is jobless and more than one in 10 residents is foreign — has avoided the emergence of an organized racist right.

The country does not lack hardline right-wing voters, including those who sympathise with the late dictator Francisco Franco, who ruled from 1939 to 1975, but dedicated far-right parties are absent from the national political scene.

Unlike movements in places like France and the Netherlands, the Spanish far-right shows no sign of making an impact at next month's European elections.

Sociologist Fermin Bouza estimates that about three million of Spain's 34 million voters could be classed as "far right".

But instead of supporting extreme fringe groups, experts say, these voters feel at home within the governing Popular Party, which forms part of the European conservative mainstream.

"The PP has managed to keep the far right out of the public eye and hold it under its control," says Bouza.

Every month Veronica Talaya, 27, visits an organisation giving handouts in the eastern city of Valencia, seeking help to clothe and feed her three children.

But here at the headquarters of Espana 2000, a far-right party, only Spaniards with a national identity card get served.

"I'd rather they helped us (Spaniards), although it sounds bad to say it," Talaya said.

"There are other NGOs that help foreigners, who are also having a hard time. They say that we Spaniards have family here who can support us."

But this type of aid programme has not gone unchallenged, and local authorities have brought a lawsuit against a group supposedly linked to Espana 2000, accusing it of discrimination for refusing aid to non-Spaniards during a handout in March.

Although relatively tiny, with 4,000 members and just four elected town officials, Espana 2000 is a rarity in Spain as an organised far-right political party.

But Espana 2000 and other small Spanish far-right groups have failed to connect nationwide, and have struggled to take off like others in Europe such as France's National Front.

"The far right in Spain is fragmented and territorial, and it has only a marginal institutional presence," said Xavier Casals, a historian and specialist on extremist politics.

Unlike the National Front, which scored a number of successes in recent elections in France, and other parties in Italy, the Netherlands, Belgium and Austria, the Spanish far right has no serious contenders for the European Parliament elections in May. Millions of immigrants were welcomed to Spain by the former Socialist government during a decade-long building boom that kicked off in the late 1990s.

Many came from Latin America, a region with strong cultural ties to Spain, and were welcomed as a good thing "for increasing productivity", says Bouza.

Since the boom turned to bust in 2008, national statistics show that many have returned home, although foreigners still account for more than five million of Spain's 47 million residents, or more than 11 percent.

Yet even with unemployment at a huge 26 percent, immigration has stayed off the political agenda.

"Spain is an interesting case in the sense that it shows that the economic crisis does not in itself boost the far right," Casals said.

He warned however that xenophobia could yet rear its head as Spain's PP leaders steer the country out of a five-year economic storm and battle calls for a referendum on independence in the eastern region of Catalonia.

"The situation in Spain is very volatile," he said.