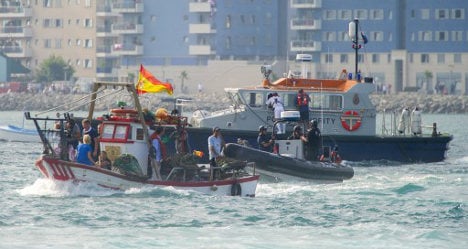 The agent with the maritime division of Spain's Civil Guard walked away with bruises after tussling with a policeman from the tiny UK-held territory, Spain's El País newspaper reported.

The scuffle apparently broke out when Gibraltar Police "charged" a smuggler's boat which had been commandeered by the Civil Guard.

Spanish officers claim agents from the British territory tried to attach a rope to the vessel and drag it back to port in the UK territory.

The Civil Guard eventually managed to regain control of the book and moor it in the nearby Spanish town of La Línea de la Concepción.

"Instead of helping the Civil Guard what they (the Gibraltar Police) did is rebuke and insulted (us), a spokesperson for Spain's National Civil Guard Association (AUCG) told Spain's Cadenaser radio station after the incident.

SEE ALSO: The Local's gallery of ten things you didn't know about Gibraltar

But Gibraltar authorities argue the Civil Guard overstepped its jurisdictional powers by seizing the smuggler's boat in waters belonging to the territory.

While Gibraltar Police on Friday issued a statement saying there had been "a verbal exchange" between the two forces, they said "at no point" had there been contact between the vessels.

Britain will file a formal complaint with Spain, local daily the Gibraltar Chronicle reported on Friday.

Spain ceded Gibraltar to Britain in perpetuity in 1713 but has long argued that it should be returned to Spanish sovereignty, but the treaty involved did not make mention of the waters around the territory known as the Rock.

On November 19th, the Foreign Office summoned the ambassador to explain an incursion by the oceanographic survey ship Ramon Margalef, which it said came within 250 metres (270 yards) of the entrance to Gibraltar harbour.