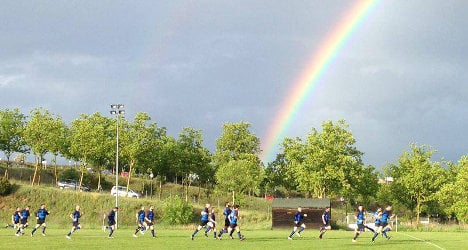 Photo: Facebook/Madrid Titanes Club de Rugby
“Our cause is to fight against homophobia in sport, not just in rugby,” Víctor Granado, the club president and team captain of the Madrid Titans told Spanish daily 20 Minutos.
His club is not only Spain's first gay-friendly ruby team but also the first to become a member of IGRAB  (the International Gay Rugby Association and Board).
“We wanted to normalize something which is part of everyday life and make it clear that anyone can come and play with us,” he explained.
The idea for the team arose a year ago in Madrid's famous Retiro Park because Granado “wanted to play rugby with five friends”.
The team's name, meanwhile is a homage to the Virginia Titans, a pioneering American college football team which included both white and black players and went on to win a state title – and become the subject of the Disney movie Remember the Titans.
“We don't ask anyone what their sexual orientation is when they come to us, but about 90 percent (are homosexual),” the team's captain explained.
“The fact that the club was formed a year ago and now there are more than 50 of us says a lot about the need for a club like this,” said club member Javier Corral.
The reception from other teams has been “stupendous”, said club president Granado.
“Other clubs have invited us to tournaments and have freely offered us help with whatever we need,” Corral added.
To date the Titans have played only friendly matches, but they will begin to play in regional leagues in September.
The existence of the Titans is another example of Spain's progressive stance on homosexuality.
One foundation recently announced plans to open the country's first old people's home for the gay, lesbian, bisexual and transsexual community.
Meanwhile, a recent international 'morality poll' by Pew Research looking at acceptance of homosexuality in 40 nations, placed Spain at the top of the list.
Don't miss stories about Spain, join The Local on Facebook and Twitter.