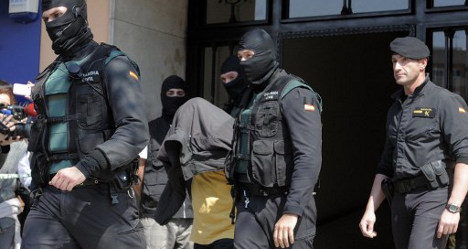 Police detained Mudhar Hussein Almalki in March 2012 in the eastern city of Valencia where he had been living, accusing him of running an online forum dedicated to "recruiting and indoctrinating 'terrorists'."

Spanish public prosecutors accuse the Jordanian-born Saudi national of belonging to the Ansar al Mujahideen Network, which follows orders from Al-Qaeda, and are seeking a jail sentence of eight years.

Almalki, 52, acknowledged calling the former leaders "war criminals" but denied having identified them as targets.

"Many people, including artists, protested against the war in Iraq and Afghanistan and nothing happened to them, everyone was against it and the killing of innocent people," he told the court.

Spanish Interior Minister Jorge Fernández Díaz accused Almalki of running one of "the world's most important jihadist forums" which was dedicated to the "recruitment and indoctrination of terrorists".

The minister said Almalki was known within the organisation as "Al-Qaeda's librarian".

Almalki denied belonging to Al-Qaeda or following the group's orders and said books and weapons manuals found in his home had nothing to do with the outfit.

"I had those books and manuals because I collected them. I collected everything about the war between the United States and Al-Qaeda," he said.

"I collect plenty of content from the Internet, books, recordings, pamphlets," he added.

Public prosecutors are seeking a jail term of eight years for Almalki for membership in a terrorist organisation.