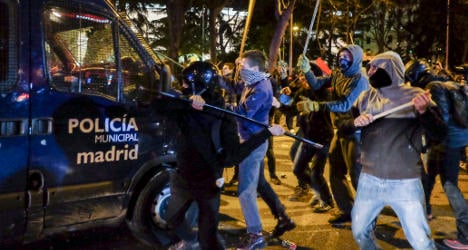 Police officers found themselves surrounded and isolated by small groups of violent demonstrators and could not received help from other agents, Spain's top police official explained. Photo: Pedro Arm

Spain will also see a restructuring of its anti-riot command structure in the wake of the incident, Cosidó said during an appearance in parliament to explain the events of March 2nd in which over 100 people were injured including 67 police officers.

"There was no problem with the planning for the operation but there were errors in the co-ordination and communication as events unfolded," Cosidó said.

This prevented police from receiving the necessary information," he added.

This meant that some police officers found themselves surrounded and isolated by small groups of violent demonstrators and could not received help from other agents, Spain's top police official explained.

Tens of thousands of people from all over Spain participated in the March 22nd "march for dignity" against the dire state of the economy.

The organizers hired hundreds of buses and at least four trains to transport protesters for the event, while the government deployed around 1,700 police.

The day was largely peaceful but turned ugly after demonstrators dispersed with dozens of youths smashing bank windows and setting fire to rubbish bins.

One 23-year-old protester had his left testicle surgically removed after being shot by riot police with a rubber bullet.

Protesters have accused police 'infiltrators' of instigating the violence while police groups lay the blame at the feet of 'radical elements'.

Several days after the March 22nd demonstration anti-riot police in three Spanish cities protested against the poor organization of the event, calling for the resignation of officials involved in planning.