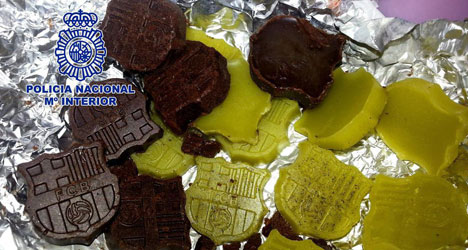 The crooked chocolatier was taken into custody along with eight other people during a police operation to bring down a drugs distribution network in the regions of Alicante and Valencia.

A lab in the Valencian coastal town of Santa Pola was also raided, where police found evidence that cocaine, marijuana and speed (amphetamines) had been prepared for sale.

The network was discovered by police in 2013 and two arrests were made in January 2014 during the first phase of the operation, Spain's National Police said in a statement.

Seven more people, including the designer of the delinquent delicacies, were taken into custody in the most recent phase this week.

A total of 300 grams (10.5 ounces) of the drugged chocolates were found ready for distribution.