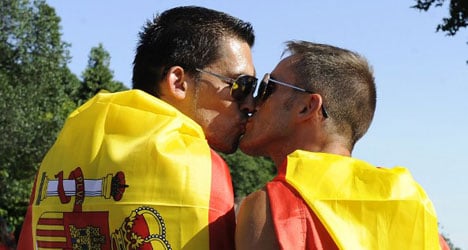 Spain was the third country in the world to legalize same-sex marriage. Photo: Dani Pozo/AFP

The Pew Research Center's Global Views on Morality poll showed that  Spain was the least homophobic country of the 40 surveyed.

The least tolerant countries were Ghana and Russia, where 98 per cent and 72 per cent of those surveyed  deemed homosexuality "morally unacceptable".

The poll — which did not include the traditionally gay-friendly nations of Scandinavia — also looked at public opinions on issues including extramarital affairs, abortion, premarital sex and gambling.

Despite its conservative Catholic background, Spain has been a progressive leader in Lesbian, Gay, Bisexual and Transgender (LGBT) rights in recent years.

In 2005, it became the third country in the world to legalize same-sex marriage.

Earlier this month, the country became the first to announce plans to open an old people's home specifically for the LGBT community. It also allows adoption by same-sex couples, and equal access to IVF and surrogacy for all couples and individuals.