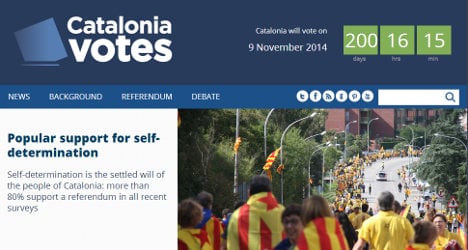 The homepage of the Catalonia votes website features a clock which counts down the days, hours and minutes until the planned vote on the issue of self-rule for the wealthy region.

"Catalonia will vote on November 9th 2014": that is the message that greets visitors to the new 'Catalonia votes' site, launched on Tuesday.

The homepage also features a clock which counts down the days, hours and minutes until the planned vote on the issue of self-rule for the wealthy region.

It's a striking message, and a bold one, given that the Spanish Parliament in Madrid recently roundly rejected Catalonia's right to unilaterally go to the ballot box.

While many people in wealthy Catalonia resent the redistribution of their taxes to other regions and would like the region to be vote on independence, the Spanish Government says the planned November 9th poll is illegal.

Under Spanish law, all Spaniards have the right to vote on whether a single region should be permitted to become an independent sovereign state.

But the Catalonia votes website shows the fight for the right to hold its referendum is far from over.

Set up by the Public Diplomacy Council of Catalonia (Diplocat) — a public–private initiative which supports an independent Catalonia — the site is a further attempt to win new international fans over to the Catalan cause.

"We set up the website after receiving feedback on how hard difficult it was to obtain information about the Catalan side of the independence debate," Diplocat Secretary General Albert Royo told The Local.

"It's hard to get this message across to an international audience because much of the media is controlled by Madrid," he explained.

"The same is true of diplomacy. Catalonia doesn't have its own diplomatic corps and it doesn't have embassies, so we have to seek other methods of communication," he added.

"The new site is a form of soft power."

Early reactions have been positive, Royo said, both from within Catalonia and from outsiders interested in the Catalan issue.

Financed by backers including the Catalan Government, trade unions and even FC Barcelona, the site features in-depth information about the November 9th poll, coverage of the issue by foreign press outlets and videos with major players including regional president Artur Mas.

"We want to vote because Catalonia is a nation," says Mas in a short English-language video presentation, which comes with a rousing background music track..

"As a matter of fact Catalonia is one of the oldest nations of Europe…with its own culture, its own language, its own identity, its own civil law," he adds.

"We want to hold a referendum for three main reasons," says Oriol Junqueras, the head of the Republican Left of Catalonia (ERC) party, in another video.

"First because we don't feel represented by the Spanish government. Second we want to vote and decide on the future of our country as every democratic country does.

"Lastly, we are working in order to solve our political, economic and social problems, with more and more democracy and to do this, we need the best tools — the tools of a State."

A recent poll run by Spain's El Mundo newspaper found that 50 percent of Spaniards still believe Catalonia will go to polls on November 9th in defiance of Madrid.